Review: The Wonderling by Mira Bartok 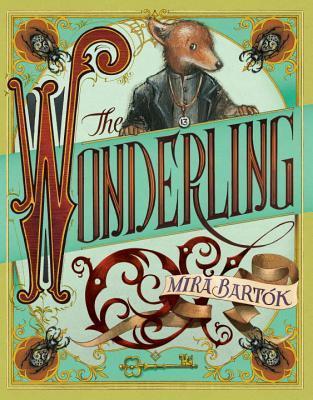 
Mira Bartok tells the story of Arthur, a shy, fox-like foundling with only one ear and a desperate desire to belong, as he seeks his destiny.

Have you been unexpectedly burdened by a recently orphaned or unclaimed creature? Worry not! We have just the solution for you!

Welcome to the Home for Wayward and Misbegotten Creatures, an institution run by evil Miss Carbunkle, a cunning villainess who believes her terrified young charges exist only to serve and suffer. Part animal and part human, the groundlings toil in classroom and factory, forbidden to enjoy anything regular children have, most particularly singing and music. For the Wonderling, an innocent-hearted, one-eared, fox-like eleven-year-old with only a number rather than a proper name -- a 13 etched on a medallion around his neck -- it is the only home he has ever known.

But unexpected courage leads him to acquire the loyalty of a young bird groundling named Trinket, who gives the Home's loneliest inhabitant two incredible gifts: a real name -- Arthur, like the good king in the old stories -- and a best friend. Using Trinket's ingenious invention, the pair escape over the wall and embark on an adventure that will take them out into the wider world and ultimately down the path of sweet Arthur's true destiny.

With a lean toward Oliver Twist, this is a story about friendship set in an imaginative and amazing world.

The groundling (a half-human, half animal person (?)) is raised under very harsh and difficult conditions in an orphange and is only known as Number 13. When a young bird groundling, Trinket, appears, he receives the name Arthur. Together they decide to escape and head out into the adventure of life, where Arthur also hopes to find out more about his own origins.

The world building in this book is amazing. The scenes are described with enough detail to draw the reader in and allow them to experience the rich world, which also includes a few steampunk-ish aspects. The beautiful illustrations add to the story and are fun to simply flip through. The author takes their time in letting the characters and scenes unfold, allowing the world to gain a solid footing as the story unfolds.

The story carries a mix of bitter-sweetness and exciting fantasy. The characters have a rough past and stand before more than one challenge. They are, especially Trinket, a delight to accompany during their adventures. Unfortunately, the plot isn't there. While Arthur does flea the village and face the world with Trinket, he doesn't have a true direction. This becomes more obvious as they discover various objects, which appear to have a purpose but then are either forgotten, lost or stolen...each time without any influence on the story. Arthur is tugged along as things happen, but never takes real stands or decisions, which influence the story, on his own. Still, it's an entertaining world for the right readers and has many aspects which create a lovely children's tale.
on December 08, 2019

Email ThisBlogThis!Share to TwitterShare to FacebookShare to Pinterest
Labels: Mira Bartok, The Wonderling