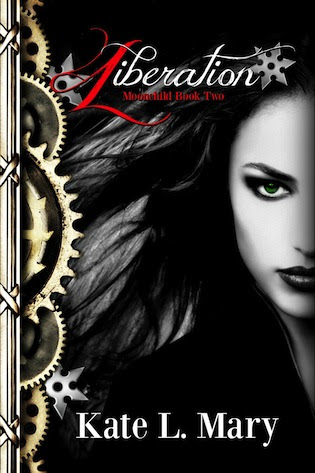 
From two-time award-winning author, Kate L. Mary, comes the sequel to MOONCHILD, “a much needed breath of fresh air in the world of YA fantasy.” After surviving the auction and a near death experience at the hands of Asher’s father, Scarlett Moon is more than ready for life to settle down, and with each passing day she starts to feel more at home in Columbus. Even with Asher ready for more than Scarlett can give, she manages to fall into a routine that almost feels like a normal life.
But one distress call is all it takes to destroy the serenity the group has managed to build.
As far as anyone knew, Paget had moved on with her life after storming out months ago, but the fear in her voice when she calls the warehouse tells a different story. Even though Scarlett never liked Asher’s ex to begin with, she can’t help feeling a little bit responsible for Paget’s situation.
Searching in the seediest part of the city, the group picks up clues as they try to piece together what might have happened. The more Scarlett learns about what the other woman has been through over the last few months, the more concerned she becomes. Even worse: there’s no sign of Paget anywhere in Columbus.
With all the clues pointing in one direction, the group leaves the city and heads for Hocking Hills. Only it seems the danger may have followed them, leaving nothing but death and destruction in its wake and putting Paget in more danger than ever before. As Scarlett learns more about the woman who used to hold Asher’s heart, she suddenly finds herself unable to deny how she really feels about him. Only, with Paget in trouble, Scarlett can’t help wondering if Asher might still have feelings for his ex.

He runs his hand down the side of my head, trailing my dark hair through his fingers. It’s gotten longer since we arrived in Columbus, down to the middle of my back, and when his hand reaches the end of my hair, his fingers brush against my arm. My skin tingles, and I take a deep, calming breath. How does he always do this?
“Moonchild,” he whispers, leaning even closer. “What’s with that name, anyway? I’ve been asking you for months, and you never answer me.”
His eyes burn into mine, and I swallow. I don’t like to share. I hate being vulnerable. Especially with Asher. But my head is spinning and he’s so close, and before I have a chance to even think about it, I blurt out the words, “It’s a nickname my mom gave me.”
He freezes and his eyes hold mine, but his expression is unreadable. “Your mom?”
A tiny voice buried deep in my brain tells me to stop talking. This is what I’ve been trying to avoid for the past five months. Opening myself up to Asher. Making our relationship more real. Sharing. He’s given so much of himself to me. Shared his entire past. His mom’s murder, his time in the pits, the murder he committed that got him sent to the mines. His father. All the details and painful memories and how they’ve affected him. But I’ve told him nothing other than general facts. My parents were killed, I was sent to an orphan home, I ran away and spent time picking pockets before being caught and sent to the mines. I’ve intentionally kept out all the emotional details.
But for some reason, right now, I don’t want to listen to that voice. Not while Asher’s eyes are burning into mine, making everything hazy. I feel drunk. Drunk on Asher.
“I’ve never been a good sleeper, even as a baby. I got my mom up at least three times a night until I was four. My dad called me a night owl.” I smile despite the stinging that has started at the back of my throat. “But my mom corrected him. She said I was just a child of the moon. Her own little Moonchild. It stuck.”
Asher’s expression is still blank, and he seems to be holding his breath, almost like he’s afraid the littlest sound will break the spell and I’ll curl into myself. He doesn’t want me to pull away from him, and even though I know I should, I don’t want to either. No one has ever been as welcoming and warm as Asher is.
“How did it end up on the wanted posters?” he whispers. “How did they find out about something like that?”
I wince and want to look away from him. His expression is unguarded, and it’s like he’s looking at me through a microscope.
“I don’t know,” I say softly. “Probably a neighbor or friend. Someone who knew my parents. I never told anyone at the orphan home or in the mines… I don’t know how they found out. But it hurts when I see it on the posters. It twists the memories I have of my mom into something ugly and—” I slam my mouth shut.
No. I’ve gone too far. I need to keep some of myself tucked away, hidden from Asher and his disarming smile.
The expression in his eyes is different now. There’s hope swimming in them now when he brushes my hair back, away from my face, the tips of his fingers barely grazing my cheek. A tremble moves through me, and I suck in a deep breath. I should leave while I still can. Being this close to Asher is never a good idea. 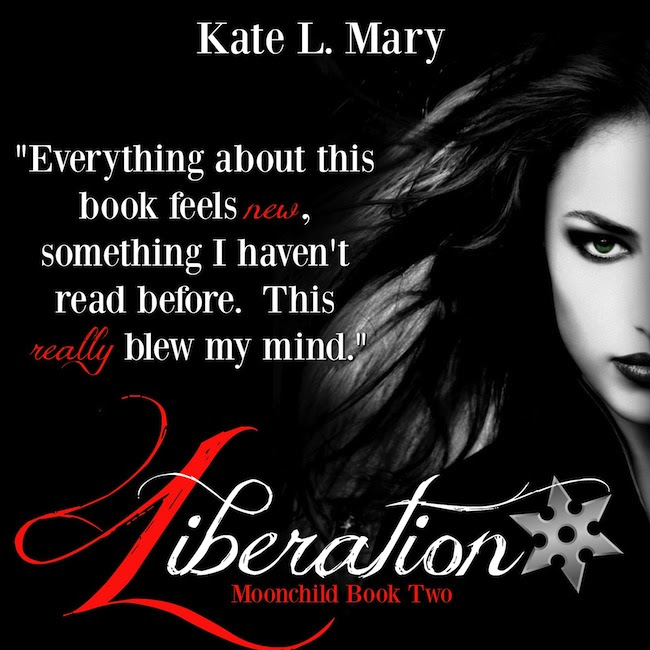 Kate L. Mary is an award-winning author of New Adult and Young Adult fiction, ranging from Post-apocalyptic tales of the undead, to Speculative Fiction and Contemporary Romance. Her YA book, When We Were Human, was the 2015 Children's Moonbeam Book Awards Silver Medal Winner for Young Adult Fantasy/Sci-Fi Fiction, and the 2016 Readers' Favorite Gold Medal Winner for Young Adult Science Fiction. Fans of The Walking Dead won't want to miss out on her Amazon Bestselling Broken World series, and the soon to come Twisted follow-up series.