Happy Book Bday, The Whizbang Machine by Danielle A. Vann! 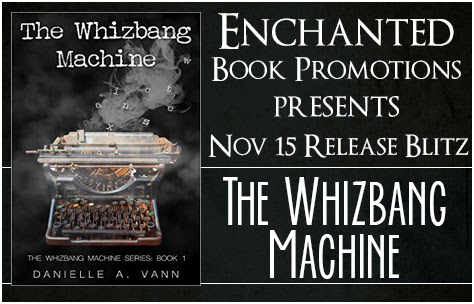 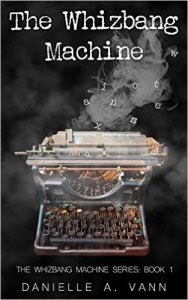 by Danielle A. Vann
YA Fantasy

After years of running from his tragic past, Jack Yale books a flight home. With him is a typewriter that is intended to be a gift for his granddaughter, Elizabeth. The minute Elizabeth’s fingers cradle the large black and cream keys the machine responses: popping, sizzling, and roaring to life with a Whiz-Whiz-BANG!
Elizabeth quickly discovers the typewriter has powers beyond anything she has ever seen. The more she types, the more the machine spells out guarded secrets. Each secret leads them deeper into a haunted past. Each secret must be revealed in order to set history straight and remove a curse that has been on their family for centuries.
To solve the mystery, Elizabeth Yale, alongside Jack, will have to crack the code of the Whizbang Machine. What they find challenges their most basic assumptions of their family, the history of the typewriter, and even Elizabeth’s father’s death. The ultimate goal is to remove the curse.
The question is: will Jack and Elizabeth be able to carry out their mission? Danielle A. Vann lives to write. When she was small, she spent endless days writing and crafting wild characters out of thin air. As Danielle grew, that love for writing sparked a career in journalism. She began her career as a scriptwriter and then moved into a flourishing career as a news reporter, food reporter, and morning/evening news anchor. That career earned her an Associate Press Award.

After becoming a mother, she was inspired to write children’s books for her three adorable children. While she holds children fiction especially close to her heart, she also loves to write books for all ages. These genres include Young-Adult Fiction, Adult Fiction, Young Reader Fiction, and Non-Fiction.
When she isn’t writing you can find her doing “mom” things, digging in her organic vegetable gardens, running, finding her Zen in yoga, or playing chef in the kitchen. She currently lives in Mansfield, Texas.
Danielle is also the author of Gracie Lou and The Bad Dream Eater, November 2016 release The Whizbang Machine, and September 2016 release The Very Tall Tale of Ranger, the Great Pyrenees, and his Adorable Friend, Miss Keys, and October 2016 release Building Faith Through A Carpenter’s Hands. To learn more, visit www.authordanielleavann.com.

Email ThisBlogThis!Share to TwitterShare to FacebookShare to Pinterest
Labels: Danielle A. Vann, The Whizbang Machine, YA Fantasy