Sneak Peek: A Bond of Venom and Magic by Karen Tomlinson with Giveaway 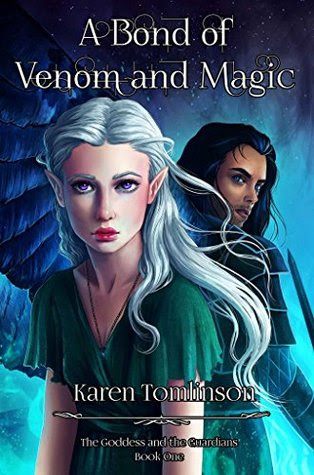 
The Wraith Lord is hunting; his prize, the key to unleashing darkness and Chaos upon the eight Kingdoms.
For Diamond Gillon the war raging in the south seems a remote danger until her home is brutally attacked. Having lost everything she holds dear, Diamond is catapulted into a terrifying new world in which legendary beasts arise, magic is condemned and half blood fae, like her, have no rights. Despite her growing feelings for her saviour, Commander Hugo Casimir, he remains a paradox – not only is he a heartless killer, he is owned by the cruel immortal fae queen; a queen who will murder her own people for magic.
As Diamond’s circumstances become ever more perilous she is drawn deeper into Hugo’s world and discovers the lengths to which he will go to save what he holds dear. Will Hugo become her friend, her protector, or – an enemy not worthy of her trust?
A Bond of Venom and Magic is a tale of two people bound by magic and secrets, but trapped in the complexities of love and betrayal. It is the beginning of an epic journey, one that will test Diamond’s resolve and determination to battle an evil that threatens not only her world but that of Eternity, the land of The Guardians and The Goddess.

You can get the first 5 chapters for FREE if you sign-up for Karen’s newsletter!

Karen Tomlinson is the author of The Goddess and the Guardians series of Young Adult fantasy books. Book one A Bond of Venom and Magic will be released October 14th 2016.
Karen has always been an avid reader. Her taste in books is eclectic but she likes nothing better than an exciting fantasy, set in a new and magical world. She lives in Derbyshire, England, with her husband, twin girls and her dalmatian, Poppy. Karen trained as a nurse and currently works as a resuscitation and clinical skills trainer, this involves training a wide variety of health care professionals and medical students in acute patient care. In addition to writing, and reading whenever she can, Karen likes to keep active. She has been training at Shotokan karate since being thirteen, likes walking, mountain biking and (for something completely different) cake decorating. She is currently working on book two in The Goddess and the Guardians series.
About me!
As soon as I could read I spent hours getting lost in the new worlds books could give me. Spending my pocket money had to be done (obviously) but not on sweets, well, not many…I spent my money on books. Back then it was Enid Blyton’s Famous Five which sparked my young mind. I didn’t rest until I had the whole set, then I migrated to the secret seven…(there was no Harry Potter then) As a teenager I would trawl through all my mum and dad’s discarded books. It was probably highly inappropriate for a thirteen year old to be reading swoony Mills and Boon romances followed by Ian Flemming, Alistair Maclean and Wilbur Smith!
Because I read anything and everything I could get my hands on back then, I now have an eclectic taste in books. I will read anything that catches my eye and absolutely love illustrated book covers! In my late teens I discovered fantasy and that genre has stayed my firm favourite. I am and will always remain a complete sucker for a fantasy with kick ass characters and worlds steeped in magic and romance!

Email ThisBlogThis!Share to TwitterShare to FacebookShare to Pinterest
Labels: A Bond of Venom and Magic, Giveaway, Karen Tomlinson, The Goddess and the Guardians, YA Fantasy