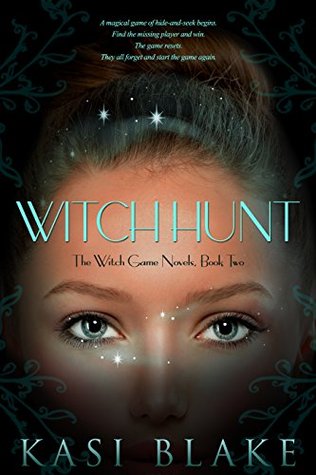 
A magical game of hide-and-seek begins.
Find the missing player and win.
The game resets.
They all forget and start the game again.
Seventeen-year-old Starr Hughes hasn't believed in magic since the day her mother died. As an aspiring reporter, the only thing she cares about is cold, hard facts. So when she hears the popular kids at school (the It-Squad) are about to start a secret game, she wants every detail, especially since she has a major crush on gorgeous Dylan Winchester. Hiding under the headmaster's desk, planting bugs, and breaking into a classmate's home are all on her to-do list. With her boy-crazy best friend Lily at her side, Starr discovers that witches are not only real, but they also need her help. Someone is using the game to steal their memories, their powers, and perhaps even their lives.

Starr is a noisy reporter, who lets her curiosity get the best of her again and again. She knows no boundaries when it comes to getting her story, which doesn't make her necessarily the most popular girl in school either. When her reporter sense swings her to a group of kids known as the It-Squad, things start getting strange. Before she knows it, odd things are happening and something is off with life in general. Now, if she can just put her finger on exactly what the problem is.

This is the second book in The Witch-Game series. Although I did read the first one, it is by no means necessary to start with book one. Each of the novels is a story for itself, handling different high schools, characters and situations. In other words, this can be read as a stand alone without any problem whatsoever.

I enjoyed this book even more than the first one. The school setting is well done, allowing the lockers and hallways to come to life. There's a lot of inner drama between the students and characters, which comes across very realistic without running into the danger of exaggeration. At first, the It-Squad and the way others see them (or don't notice anything out of sorts) comes across a bit odd, but as the story unfolds, the reason for this becomes clear.

The characters are a real treat. Starr isn't without her flaws. The way she hunts done a story is over the top at times, and its no wonder she isn't loved by all. Still, it's hard not to like her. She has her heart in the right place and a good sense of justice. The other characters each have very definite personalities and traits, making them come to life in their own way. None of them is perfect, but it's exactly this which makes the easier to sympathize with.

The real pulp of the plot takes a bit to get going as the 'normal' situation gets laid out first and allows the reader to sink into the characters and gives hints at the soon layered mystery. And there are lots of twists and turns ahead. A few are easy to see, while others hit with unexpected surprise. The tempo holds steady, however, through-out, making this a book not easy to put down.

There's romance too--sweet and a little humorous. Although there are some darker moments and tension does run high especially toward the end, humor and sarcasm pepper the dialogue making it a fun, entertaining read.
on November 14, 2016