Cover Reveal - Out Of Beat by Cassandra Giovanni with Giveaway 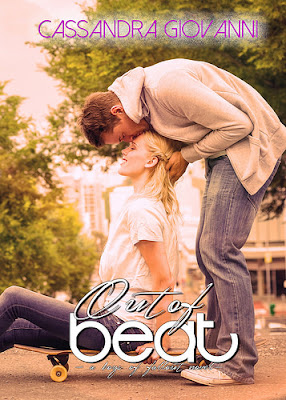 At least not anymore.

She hasn't seen that boyish face, always covered in a five o'clock shadow, dimpled smile and teasing hazel eyes since the day he left to go on tour with her brother Joey's band. Now with a major record label backing them the band is in need of a bit of help, and when Joey asks Skylar to be the band's photographer, she can't help but say yes.

Of course, Joey doesn’t know about that forbidden kiss.

The one Skylar hopes Danny’s forgotten.

One smile and she finds herself slipping again.

But he’s the drummer, and he’s beaten her heart before.

And she won’t let it happen again.

You can find Out of Beat on Goodreads

You can pre-order Out of Beat here:
- Amazon
- Kobo
- iTunes
- Google Play

The cover is designed by Gio Design Studios. This cover reveal is organized by Lola's Blog Tours. 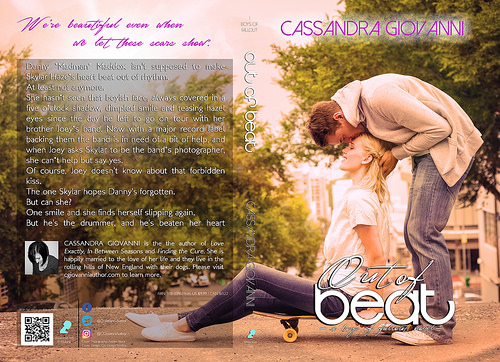 “Lark!” Zack says as he comes in the back door of my bedroom. He sweeps me into his arms and spins me around the room before putting me on the ground. “You’re all grown-up!”
I cross my arms and narrow my eyes at him. “And I still hate it when you call me Lark.”
He pouts, and I can’t stay mad at him. He’s foolishly good looking in his band t-shirt, zip-up hoodie, and beanie. It covers his dapper haircut that has a streak of chemical white-blond he dyes a different color to suit his mood. I pull the beanie off his head, and he winks. Pink.
“Something you’ve been meaning to tell me, Killer?” I ask.
His pout drifts into a smile, complete with lady-killer dimples. “I’m completely secure in my manhood. You can ask my girlfriend.”
“Settling down are we?” I tease just as Aaron bursts through the door and throws me over his shoulder. Where Joey and Zack are tall and skinny, Aaron and Danny are muscular. Danny’s got the arms while Aaron has the abs.
“You get her bags,” Aaron orders. “We’ve got a radio interview to get to.”
“Do either of you know how to use a front door? Or knock?” I ask as I hang suspended over Aaron’s shoulder with my hand cupping my face.
Danny comes through the door next and his head jerks back as he takes in the scene. “Looks like you don’t need my help.”
I nod to my rack of longboards. “You’re the only one I trust with my boards. The pintail and the dinghy.”
“Speak English,” Zack says, but Danny seems to understand and grabs the two boards.
“Look!” Danny says, holding the dinghy up next to Zack’s head. “The trucks match your hair!”
“I was wondering where you fools went to!” Joey says as he walks in the door. “Mom and Dad want to say bye to all of us, but I’m pretty sure Dad will prefer if you’re not hauling Sky around ass over teakettle.”
“Oh, come on! This is totally normal,” Aaron says, and Joey blinks at him. “Fine.”
“Don’t worry,” I say, squeezing Aaron’s arm as he sets me down. “You and Danny can take turns trying to bench press me after.”
“Sick!” Aaron whoops. “You’re the perfect size for that!”
Danny narrows his eyes at me as the guys file up the stairs. I hold my hand out, and he gives me the dinghy. “Bench press you?”
I lean my shoulder into him before we head up the stairs. “Just because you like the idea.”
He laughs, shaking his head as he holds the door open for me. “I’m afraid Aaron will like it too much.”
“Jealous?” I ask.
His neck turns red beneath his scruff. “Protective.” 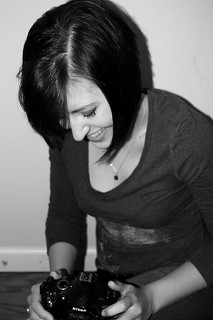 Cassandra doesn’t remember a time when she wasn’t writing. In fact, the first time she was published was when she was seven years old and won a contest to be published in an American Girl Doll novel. Since then Cassandra has written more novels than she can count and put just as many in the circular bin. Her personal goal with her writing is to show the reader the character’s stories through their dialogue and actions instead of just telling the reader what is happening. Besides being a writer, Cassandra is a professional photographer known for her automotive, nature and architectural shots. She is happily married to the man of her dreams and they live in the rolling hills of New England their dogs, Bubski and Kanga.
For regular updates visit Cassandra’s website and sign up for her newsletter.

GIVEAWAY!!!
There is a cover reveal wide giveaway for the cover reveal of Out of Beat. One winner will win a swag pack including bookmarks and postcards. This Giveaway is US only.
a Rafflecopter giveaway

Email ThisBlogThis!Share to TwitterShare to FacebookShare to Pinterest
Labels: Boys of Fallout, Cassandra Giovanni, Giveaway, Out of Beat, YA Coming of Age