Review: The Next President by Kate Messner 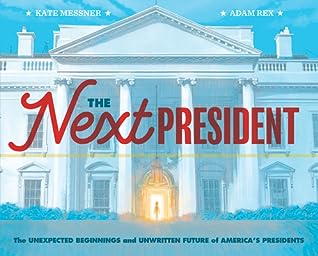 
An inspiring and informative book for kids about the past and future of America's presidents.Who will be the NEXT president? Could it be you? When George Washington became the first president of the United States, there were nine future presidents already alive in America, doing things like practicing law or studying medicine.When JFK became the thirty-fifth president, there were 10 future presidents already alive in America, doing things like hosting TV shows and learning the saxophone.And right now—today!—there are at least 10 future presidents alive in America. They could be playing basketball, like Barack Obama, or helping in the garden, like Dwight D. Eisenhower. They could be solving math problems or reading books. They could be making art—or already making change.• A breezy, kid-friendly survey of American history and American presidents• Great for teachers, librarians, and other educators• Kate Messner's nonfiction picture books have been lauded by critics and received a variety of awards.For young readers and students who loved The New Big Book of Presidents, Lincoln and Kennedy: A Pair to Compare, and Kid Presidents: True Tales of Childhood from America's Presidents.A helpful addition to curriculums of 5th- to 8th-grade students studying U.S. History and civics and the federal government.

Presidents weren't born as being presidents, and this book slides through all sorts of interesting facts about each president's life before they took office...and demonstrates that any American citizen has the possibility of being elected someday.

This book encourages young readers to dream, and that how it starts out. But right after that, the first president is introduced. Instead of concentrating on each president's accomplishments, this book gives one or two interesting tidbits, but then mentions how many presidents were born and growing up at the same time, and even hits at some of the things they were up to. And most of these were definitely not 'presidential'.  It is interesting to see all of the normal and not so usual hobbies and jobs these future presidents were doing years before they were actually elected.

While the book is placed in chronological order, time flows a bit back and forth. This breaks up the usual mundane atmosphere and adds as much life as the interesting facts. The illustrations are nicely done and reinforce the point—presidents were not raised to be presidents, but rather had diverse lives like every other normal human being. Some moments are humorous, others inspirations, and a few simply surprising.

At the end of the book, there's a map, which displays where presidents were born, a summary of the requirements to become president, a few 'changing face' facts, and a list of possible reads to learn more about the presidents.

It's an entertaining way to learn about the presidents...and that with a new twist. It also does a lovely job at encouraging young readers to hold onto their own dreams, since even they might find themselves as president someday.

The Author...
Kate Messner is an award-winning author whose many books for kids have been selected as Best Books by the New York Times, Junior Library Guild, IndieBound, and Bank Street College of Education. She lives on Lake Champlain with her family.


The Illustrator...
Adam Rex is the author and illustrator of many beloved picture books and novels, including Nothing Rhymes with Orange and the New York Times bestseller Frankenstein Makes a Sandwich. He has worked with the likes of Jon Scieszka, Mac Barnett, Jeff Kinney, and Neil Gaiman. He lives in Tucson, Arizona.

Email ThisBlogThis!Share to TwitterShare to FacebookShare to Pinterest
Labels: Kate Messner, The Next President