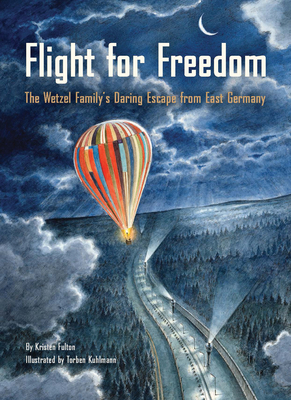 An Inspiring True Story about One Family's Escape from Behind the Berlin Wall!
Peter was born on the east side of Germany, the side that wasn't free. He watches news programs rather than cartoons, and wears scratchy uniforms instead of blue jeans. His family endures long lines and early curfews. But Peter knows it won't always be this way. Peter and his family have a secret. Late at night in their attic, they are piecing together a hot air balloon—and a plan. Can Peter and his family fly their way to freedom? This is the true story of one child, Peter Wetzel, and his family, as they risk their lives for the hope of freedom in a daring escape from East Germany via a handmade hot air balloon in 1979.
• A perfect picture book for educators teaching about the Cold War, the Iron Curtain, and East Germany
• Flight for Freedom is a showcase for lessons of bravery, heroism, family, and perseverance, as well as stunning history.
• Includes detailed maps of the Wetzel family's escape route and diagrams of their hot air balloon
For fans of historical nonfiction picture books like Let the Children March, The Wall, Growing Up Behind the Iron Curtain, Armstrong: The Adventurous Journey of a Mouse to the Moon.


This is a well done telling of bravery and determination during a difficult point in German history, which is sure to leave an imprint with young readers.

The wall separated Germany into two very different states: one had freedom, the other stood under tyrannic control. A little boy on the eastern side discovers a picture under his parents' mattress of a hot air balloon. Possession of this picture means arrest. So, he keeps quite as his parents slowly gather materials and plan their escape over the wall and to the freedom of the other side of Germany beyond.

Having lived over twenty years in Germany and raising a family there, I was already well aware of this story, the circumstances and the history surrounding it. This book does a very good job at bringing life in East Germany across in a quick way young readers will understand and makes the stakes clear while staying in a child appropriate realm. The danger is clear as well as the daring of this family. The text is also age appropriate and brings across what this type of escape meant nicely.

The illustrations hold well to the German style and present it with a historical atmosphere, which still lures children in. The fearful moments are brought across very well as well as the surroundings, allowing the details and scenes to come across with fairly nice historical accuracy.

As to the book in total, I see this more appropriate for the upper end of the intended age group, and then, only interesting with surrounding context. The author does add several pages of more detailed information and background at the end, which is very interesting and fills in whatever holes might exist. However, this section is only for older readers and won't fit well with the younger age group in this style. This book works better when slid in with the theme of WWII and German segregation. I hate to admit it, but there are very few children of this age group who will know what WWII was about...let alone the Berlin Wall or divided Germany (here, in the United States, of course). So, when using this book, there will need to be discussions with the listeners beforehand and afterwards. Otherwise, they won't know the context. But taking this into consideration, this book definitely does a great job at it's theme...and I can only recommend it and am sure young listeners will be left with food for thought.

The Author...
Kristen Fulton is a children's book author. She can always be found with a notebook in hand as she ventures through historical sites and museums. Most of the time she lives in Florida—but she can also be found traveling the country by RV.

The Illustrator...
Torben Kuhlmann is an award-winning children's book author and illustrator. Starting in kindergarten he became known as "the draftsman." Flying machines and rich historical detail often adorn his work. He lives in Hamburg, Germany. Fligh