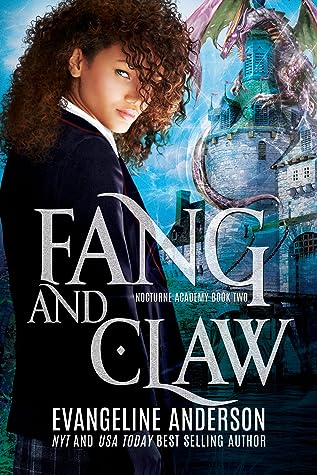 
My name is Kaitlyn Fellows and I'll never be the same.

The Fire stole everything from me.

The right side of my face is normal--even pretty. But the left side, I hide in shame. That's where The Fire marked me...scarred me forever.

At Nocturne Academy I'm nothing--just a little Norm girl with no supernatural powers and a disfigured face.

Which is why it's so strange that a big, Handsome Drake like Ari Reyes should take an interest in me.

But it isn't only Ari who's interested in me.

For under his high cheekbones and clear amber eyes, he hides another, much more frightening visage--A Drake, the fire-breathing monster that lives within him.

A monster who has decided I should be his alone.

Can I survive Ari's love for me? And more importantly, can I survive the love of his Drake?

Because once a girl has been claimed by a Drake, the only way out is through The Fire.

What am I going to do?

Dragons, witches and vampires mix to form a delightful atmosphere in a romance full of trials, self-doubt and tension.

This is the second book in the series, and I did not read the first one. However, this proved to be no problem as the author carefully weaves in the right amount of background information to allow the reader to sink right into the story.

Kaitlyn is sixteen, attends the Nocturne Academy as a member of the coven (although she is human), is disfigured thanks to a fire which killed her parents, and struggles against self-doubt and bullying. While surrounded by loving friends, she finds herself constantly butting heads with three witches, who have it out for her. But the person who bothers her most is Ari, a royal Drake. Unknowing to her, his Drake has claimed her, and Ari is determined to follow suit and start a lifelong relationship with her.

As a fan of this type of fantasy, I saw the cover and decided to give it a go. The result...a read interesting enough to hold me to the pages to the very end, but one which had some issues as well.

I like Kaitlyn and found myself reading the book in one sitting to all hours of the night. She faces quite a bit, and it's hard not to cheer for her and hope she overcomes all the seemingly impossible obstacles. I think her friends made this one even better. They are so true and loving and have different personalities that it's hard not to love every single one. The bonds are golden as is Kaitlyn's heart. The people she's up against are easy to grumble about and hard to beat. There are some cliche characters and situations, but this actually adds to the fun. It creates an easy read, which flows well.

While I could connect well with Kaitlyn and her friends, Ari—who shares POVs in this book—remained at an arm's length. We get his thoughts but he's simply missing a some depth and personal, close conflict, which would really bring him to life. It's hard to care whether he succeeds in winning over Kaitlyn or not. Also, the book is long. While I did read it in one sitting, I kept finding myself skimming over paragraphs here and there as some scenes rambled on too long. On the other hand, there were several areas which I would have loved to have seen a little more. Also, the writing is a little weak at times. The end of each chapter ends with a foreshadowing type of statement, which drove me nuts. But that's a horribly personal issue, which probably doesn't even get noticed by most readers.

Summed up, this is a book worth picking up and diving into. It could have been an awesome read, but was missing some polishing and TLC. Still, I knock it down too much since I was bound to the pages until the very end. So, fantasy, academy fans...you'll want to read this one.