Review: Run For Your Life by Silvana Gandolfi 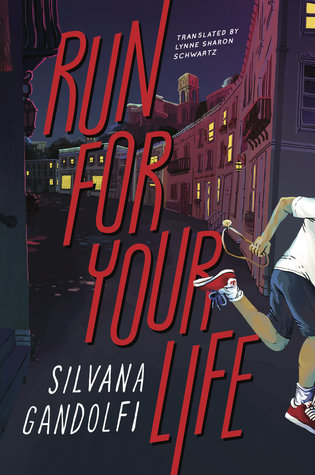 
A talented young runner, Santino lives in Palermo, Sicily—a beautiful region of Italy that’s dominated by the Mafia. With Santino’s first communion approaching, his father and grandfather carry out a theft to pay for the party—but they steal from the wrong people. A young, cocky Mafioso summons them to a meeting, and they bring the boy. As Santino wanders off into the old abandoned neighborhood, he hears shots and runs back to see two armed men and his father and grandfather slumped over in the car. The boy barely escapes with his life. Now, he’s left with a choice: cooperate with police and be a “rat,” or maintain Omertà: the code of silence.Twelve-year-old Lucio lives in the northern Italian city of Livorno and dreams of sailing when not taking care of his his young sister, Ilaria, and his sick mother, who is convinced that a witch has cursed her. One day, Lucio’s mother goes missing and he receives a mysterious text: “Come to Palermo. Mamma is dying.” Panicked, Lucio grabs Ilaria and rushes to Sicily, where Lucio’s and Santino’s stories converge with explosive results.Inspired by a real-life Mafia episode, Silvana Gandolfi’s Run for Your Life is a powerful survival story of young people finding the courage to do the right thing when faced with the cruel realities of the adult world.

This book was originally published in Italy in 2010 and involves a real life mafia event in Sicily.

Santino starts as a six-year-old boy in Palermo, who quickly learns that his father has a bit of a dark side. During a trip with his father and grandfather, Santino witnesses their murder and finds the gun then turned on him. He does the only thing he can—runs for his life. At the same time, Lucio lives in Livorno and cares for his little sister thanks to his mother's health issues. When his mother goes missing, he receives a letter to rush to Palmero. There the two boys' fates collide.

This book starts out written from both Santino's and Lucio's perspectives, their stories very different, at first. It was a bit confusing to bounce between the two, but after understanding how the author wove things, there were no problems sinking into the tale. Not only is this a fast paced story with some very unexpected twists and turns, but being based on real events makes it even more intriguing. Especially boys will enjoy this one. The two characters are easy to sympathize with, and their decisions are simple to understand. There is quite a bit of tension mixed in with the murder and heart-stopping moments. And yes, there is some violence as well. So, more sensitive readers will need to be aware of this.

It's definitely an exciting read, which will keep readers on the edge of their seats. The ending also rounds things up nicely and satisfies completely.
on December 31, 2019