Review: If The Shoe Fits by Deborah Guarino 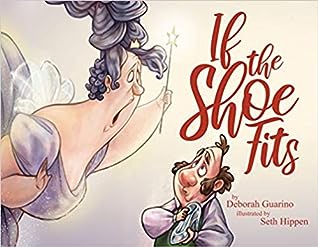 IF THE SHOE FITS...
by Deborah Guarino
Illustrated by Seth Hippen
Schiffer Publishing
Picture Book
32 pages
ages 7 and up


Ever wonder what might have happened if a certain glass slipper had been placed on the wrong maiden's foot... and fit?! In this comic twist on a classic fairy tale, Murray, a humble shoemaker, creates a pair of glass slippers for a frantic fairy godmother when her wand runs out of power, setting off a rollicking chain of events that may force him to disappoint a prince, risk the fairy's wrath, and sacrifice the secret love of his life. Deborah Guarino, author of the bestselling Is Your Mama a Llama?, has created a magical story that will delight readers of all ages. Vivid illustrations bring the characters brilliantly to life in this tale of true love, royal mayhem, and big feet.


Taking a spin on the outskirts of a well-known fairy tale, this book holds all the magic and cleverness to become a fairy tale in its own right.

Murray is a meek and mild shoe maker, who secretly harbors feelings for one of his employees, but she, in turn, only has eyes for the prince...a man she'll never get on her own. When the Fairy Godmother begs Murray for help on a glass slipper issue, he unwittingly opens the possibility for his heart's desire to wrangle in the prince. All she needs is a little more help from him. And if it means making the love of his life happy, he'll do about anything. Even risk losing her if it seals her own happiness.

While many Cinderella re-tellings have appeared of the years, this one ranks under my favorites. It steers clear of Cinderella, in many ways, and concentrates on those glass slippers instead. The tale weaves into a story of its very own, making Murray a character to love and root for thanks to his selflessness and true caring for another individual. There's a nice bit of humor and just a dash of 'what-will-happen-next', and a sprinkle of magic as well. The moral to the story is clear, and the smiles of a fairy tale ending are guaranteed.

The illustrations are amazing and make the tale really take flight. The style has a traditional flair and yet allows the characters to mold into their own style, making the connection to Cinderella fall away even more. It's one of those books to be treasured and read again and again.

The Author...
Deborah Guarino is best known as the author of the popular children's classic Is Your Mama a Llama?, that's been entertaining readers for three generations in several editions and languages worldwide. A produced playwright, lyricist, artist, editor, and actor, her admiration for the hilarious Mel Brooks and her long friendship with the late, great author Isaac Asimow inspired Deborah to create Murray, this book's narrator. After living in Manhattan and London, she now resides in New Jersey, where she raised two sons, Josh and Daniel. Currently the human-in-residence in a home shared with her dog, two cats, and a parrot, Deborah is also a popular speaker at schools nationwide.


The Illustrator...
Seth Hippen enjoys cooking up compelling characters, and If the Shoe Fits is his first foray into children's books. He spends most of his time making characters move through the awesome art of animation, so you may have seen his work on the silver screen a time or two. His most magnificent work, however, happens to be a fine family of five—the craziest clan of characters anyone could conceive.