Review: The Casket of Time by Andri Snaer Magnason 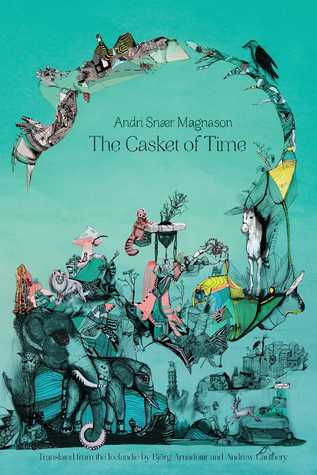 The Casket of Time is a fantastical tale of time travel and environmental calamity.Teenage Sigrun is sick of all the apocalyptic news about the “situation” and, worse, her parents’ obsession with it. Sigrun’s family—along with everyone else—decides to hibernate in their TimeBoxes®, hoping for someone else to fix the world’s problems . But when Sigrun’s TimeBox® opens too early, she discovers an abandoned city overrun by wilderness and joins a band of kids who are helping a researcher named Grace solve the “situation.”The world, according to Grace, is under an ancient curse. There once was a princess named Obsidiana, who was trapped in time by the greedy king of Pangea. To protect Obsidiana from dark and gloomy days, the king put her in a crystal casket made of spider silk woven so tightly that time itself couldn’t penetrate. The king’s greed for power doomed his kingdom and the trapped princess. Sigrun sees eerie parallels between the tale of Obsidiana and the present-day crisis, and realizes it’s up to her and her friends to break the ancient curse and fix the world.

As a story within a story, this is an intriguing adventure with a message very fitting for today.

Everyone is concerned about the end of the world, but nobody knows how to 'fix' Earth and all of the messes humans made. Sigrun's family, like everyone else, decides to enter their Timebox and simply wait things out. Sigrun, however, accidentally wakes up early and ventures out to find the world in an unexpected state. Taken in by an elderly woman, Grace, Sigrun hears the tales of Obsidiana and a princess. And these tales make her realize what needs to be done.

I was excited to get this book...not only coming from a wonderful author, but translated as well...and was looking forward to diving in. Firstly, the blurb does not represent the story. So, anyone hoping to delve into a middle grade adventure is going to be disappointed. As was I. Because of this, the first chapters are rocky, and I found myself wanting to put the book aside. First, when I read the other reviews, did I pick it back up and give it another go. With the more accurate story line in mind, the book flowed much better. However, this is still a mistake, which will cause issues for the intended audience.

The story is intriguing and packed with messages fitting to today's society. Sigrun is easy to like as are the characters of the 'retelling' part of the tale. The entire thing reads like two very different books, one being more science fiction and the other fantasy. It's a strange marriage that doesn't quite click perfectly, but the retelling was interesting enough to hold my interest. Luckily, the retelling takes up most of the tale as the character Grace spends much of the time reciting it to Sigrun. Sigrun then takes the messages from the fairy tale and uses them in her world for an interesting end. The end is very satisfying.

All in all, it's an interesting read and anyone interested in the environment or world-saving issues is sure to enjoy this book quite a bit.
on December 26, 2019