Review: C Jumped Over Three Pots and A Pan by Pamela Jane 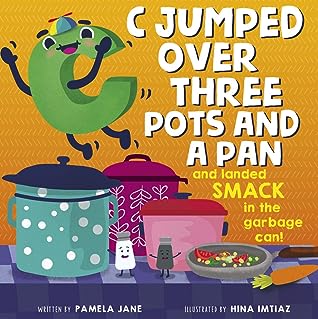 C JUMPED OVER THREE POTS AND A PAN
and landed Smack in the garbage can!
by Pamela Jane
Illustrated by Hina Imtiaz
Schiffer Publishing
Picture Books
40 pages
ages 3 to 8

The letter C falls into the garbage can, and it is up to the rest of the alphabet to save him from ending up in the dump! In this rollicking, action-filled story, the letters of the alphabet must work together to help their friend. But four letters of the alphabet are missing! Could they be the answer to saving C? This unique book conveys the transforming power of teamwork and brings language and storytelling to life for young readers as they try to guess the secret word the missing letters form--a word that may save the day for poor C. An adventure, a puzzle, and a word game, this suspenseful story is a delightful approach to letters and words.

The letters of the alphabet hit an adventure, which takes a small twist into a fun mystery.

A,B, and C are in the kitchen and maybe, up to a little bit of nonsense. When C goes overboard and lands in the stinky trashcan, the other letters need to find a way to help him back out. Deciding the 'E' has the most arms and would be the right letter for the job, they head out to find him. But he's seemed to have disappeared!

While this book does center around the letters of the alphabet, it is by no means the average 'alphabet book'. Each letter comes into play, some with a passing hello and others are pulled directly into the adventure. While young listeners do get a chance to identify each letter, it's indirectly and allows the story itself to control the pages. At the end, there's a clever surprise which, again indirectly, introduces young listeners to the idea of placing the letters together to form a word.

The entire thing is written in playful, easy rhymes and is just right for a read aloud. It's not a serious book, and guarantees some smiles and giggles along the way. But not just in word. The illustrations allow the silliness to gain extra footage as each letter displays a distinct and quirky personality. Young listeners will enjoy discovering each one and flipping through on their own to revisit them. It's a cute way to gain interest in learning the alphabet and reading.