Review: Children of the Gods by Jessica Therrien with Giveaway 
Elyse knows what it means to keep a secret. She’s been keeping secrets her whole life. Two, actually. First, that she ages five times slower than average people, so that while she looks eighteen years old, she’s closer to eighty. Second, that her blood has a mysterious power to heal. For Elyse, these things don’t make her special. They make life dangerous. After the death of her parents, she’s been careful to keep her secret as closely guarded as possible. Now, only one other person in the world knows about her age and ability. Or so she thinks. Elyse is not the only one keeping secrets. There are others like her all over the world, descendants of the very people the Greeks considered gods. She is one of them, and they have been waiting for her for a long time. Some are waiting for her to put an end to centuries of traditions that have oppressed their people under the guise of safeguarding them. Others are determined to keep her from doing just that. But for Elyse, the game is just beginning – and she’s not entirely willing to play by their rules.

This is a lovely series which takes a modern day twist on Greek mythology.

The series follows Elyse, who despite her appearance of eighteen years is actually nearing ninety. She knows little about her own history or even if there are others like her. When William finds her, the story begins. She not only learns about an entire race of people just like her, the Descendants, but soon discovers why everyone suddenly seems so interested in her. The adventure grows from there.

Unlike many series, this one gets better from one book to the next. Book one concentrates on Elyse learning and coming to terms with who she is and the danger she's up against, while the tension and action mounts in the next two until the last book ends with all the epic feelings that such a series deserves. There's intrigue. There's high tension action which never seems to end. Emotions flow in all ups and downs, and the romance reels in. In other words, this trilogy has everything a great read should.

One of my favorite parts about this trilogy is the pacing. Time is take to let the reader get to know Elyse and William well before the action mounts. And the further along the story goes, the more the two characters are up against. The division of the Descendant race into two opposing sides is well done, and the world the make up is described vividly. The problems and decisions make sense and lure in, making this one of those trilogies which is hard to put down.

The idea of a prophecy needing to be fulfilled hits a little cliche as does the relationship between elyse and William. But this is easy to forgive as the rest of the mythical world grabs up in a whirlwind tale, which is a sheer delight to read. 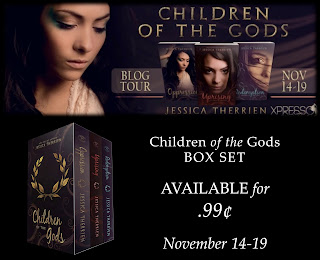 Jessica Therrien is the author of the young adult paranormal fiction series Children of the Gods. Book one in the series, Oppression, became a Barnes & Noble best-seller shortly after its release.
Aside from her Children of the Gods series, Jessica’s work can also be found in a published collection of flash fiction stories called Campaigner Challenges 2011. Out of over 350 submissions her story, The Soulless, won first place for people’s choice and fourth place in the judging round of Rachael Harrie’s Writing Campaign Challenge. Her story, Saved, is also available as part of the anthology.
Jessica spent most of her life in the small town of Chilcoot, California, high up in the Sierra Nevada Mountains. In this town of nearly 100 residents, with no street lights or grocery stores, there was little to do but find ways to be creative. Her mother, the local English teacher, inspired her to do all things artistic, and ultimately instilled in her a love for language.
In 2003, Jessica attended California State University Long Beach where her passion for language found her studying Chinese, and in 2005 she moved to Taiwan to study abroad. From 2005 to 2006 Jessica was fully immersed in the Chinese language as she attended National Taiwan University, and in 2008 she graduated from San Diego State University magna cum laude.
Jessica currently lives in Irvine with her husband and two sons. She is working on an adult novel and a children’s picture book.