Review: Grynbad and the Seven Soups by David Hailwood 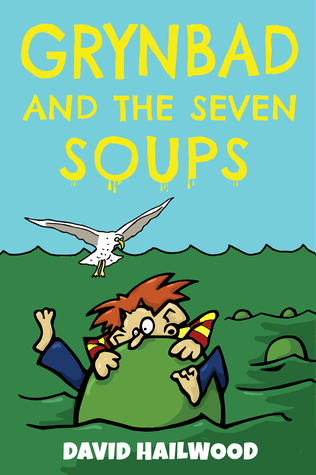 
Timmy Grynbad has bad teeth, and a big heart. So when his beloved grandpa’s most magnificent false teeth get stolen by a great green Gribble Grobble, he responds in the same manner as any dutiful grandson would; he leaps headfirst into a barrel of custard and sets off after them.

Emerging in a strange land of liquid, Timmy soon discovers he must cross the Seven Soups and face its many hazards.

Along the way he will battle lolly-loving pirates, wrestle with mermaids, haggle with trolls, and learn to run on custard. But such tasks pale in comparison to the dangers that await him in the foul reeking depths of minestrone!

Will Timmy sink or swim? Find out inside this fully illustrated self-contained comedy fantasy adventure, available exclusively to Kindle Select. 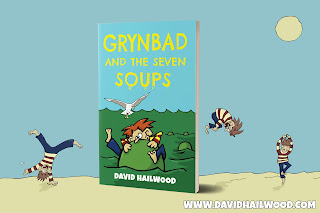 
Packed to the brim with silliness, adventure and imagination, this tale even manages to work in the wonderful love between a grandfather and his grandson.

Timmy thinks his grandfather's teeth are so cool—they might be fake but they are big, bad and can really chomp. When Timmy's visit to the dentist reveals anything but a perfect set of biters, things turn grim in the family. A next day visit to Grandpa in the retirement home results with a terrible event; Grandpa's teeth are missing! Timmy dives into the barrel of custard to search for his grandfather's chompers...a feat which lands him in the seas of Seven Soups and tons of adventure.

This is NOT a book to be read with a serious attitude. Timmy might be full of heart and ready to take on almost anything to get his grandfather's beloved teeth back, but it's a journey into fantasy pure. From pirates to mermaids, trolls and so much more, Timmy comes across the most amazing adventures as he travels through Minestrone, Tomato and many other soupy waters.

There is never a boring moment, not with countless amazing situations, quirky characters and adventures which hit the depths of imagination roll along at top speed. It makes for a very entertaining, quick read and unexpected twists on every page. Boys and reluctant readers will be lured in by this story. As for serious readers, they might shake their heads.

And there's Timmy's wonderful heart. Even with all of the nonsense, the sacrifice and effort Timmy puts forth is impossible to ignore. He loves his grandfather and gives his all to help him. Even when it comes to finding his teeth. 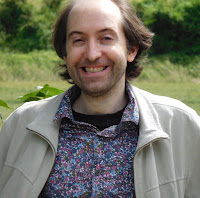 David Hailwood is a two-time BBC Writers Room sitcom writing finalist, who’s had comedy material broadcast on ITV and E4.  He’s spent the past twenty years writing comic scripts for numerous publications around the UK, including Egmont’s best selling children’s comic ‘Toxic’.  He edits the ‘100% Biodegradable’ comic anthology, and his previous book of Alternative Facts ‘Not A Lot Of People Know That’ (co-written with F.J. Riley) received over 80 5-star reviews and made it into the iBooks top ten ‘Free Humour’ chart.  His debut children’s fantasy novel ‘The Last Of The Navel Navigators’ was awarded a Distinction as part of his Creative Writing MA at University of Chichester, England.

Universal Book Links (take you to the most appropriate store for your country):