Review: B is for Baller: The Ultimate Basketball Alphabet by James Littlejohn 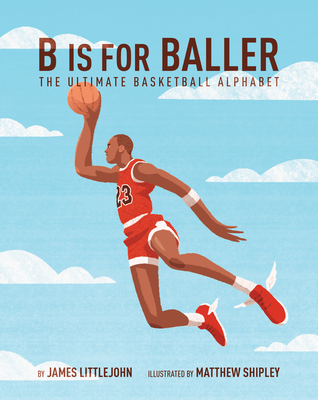 B IS FOR BALLER: THE ULTIMATE BASKETBALL ALPHABET
by James Littlejohn
Illustrated by Matthew Shipley
Triumph Books
Picture Book
ages 3 and up
32 pages

Featuring dozens of iconic NBA superstars like Michael Jordan, Larry Bird, LeBron James, Wilt Chamberlain, Kobe Bryant, and Steph Curry, B is for Baller is the ultimate alphabet book for young hoops fans—whether they're taking their first shot at the ABCs or already perfecting their threes! James Littlejohn's words leap off the page and bring legends to life, while Matthew Shipley's colorful, stylish illustrations are sure to delight fans young and old. What started as a successful Kickstarter project from two passionate NBA fans is now the perfect read for little ballers everywhere!

Little (and big) basketball fans come face to face with not only a lovely way to learn the ABCs, but lots of basketball tidbits along the way.

This is not the usual type of ABC book, but rather, caters to hoop and court fans. With each letter of the alphabet, comes a different basketball star and a dash of interesting facts even some adults might not know. But this isn't a run through stars and information alone. Humor and clever word play give each page and letter an unexpected twist. While some (like B for Larry Bird) are direct and bring the humor along subtly, others are very imaginative and guarantee a few giggles.

The illustrations not only depict the players rather well but let the humorous side fly. Nick names and aspects of the players take on entirely different spins in the pictures, many of which are sure to open up to discussions with young listeners and help older readers share their own enthusiasm for the sport.

Summed up, this is an original take on ABCs and basketball (NBA), which is sure to gain a place in hoop fans' hearts.

The author...
James Littlejohn is a writer, father and fan of fast breaks where nobody dribbles. He once tried out for a pro minor-league basketball team. He didn't make it.

Matthew Shipley is an illustrator whose art has appeared in projects with Major League Soccer, Bleacher Report, ESPN and others