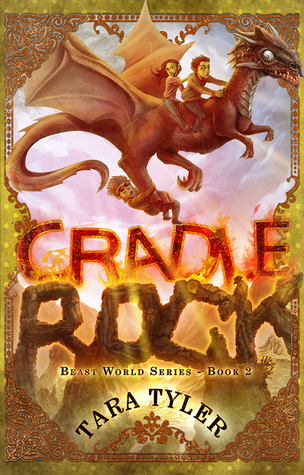 
Welcome to the forest.
Rumors are spreading about beast origins, and it isn't pretty. Once thought to be evil mythical creatures of folklore, humans turn out to be a real part of beast history, and horrifically, a part of beast beginnings. And this discovery of the truth is all thanks to Gabe, a goblin from Broken Branch Falls. He never set out to change the world, but change it, he has.
Now, Gabe and his girlfriend Ona are headed in opposite directions for Spring Break. Being a logical goblin, Gabe tries to talk her out of it, but there's just no reasoning with a stubborn ogress, and Ona is determined to dig up evidence of humans.
But when Ona goes missing, Gabe and his friends fly to Cradle Rock to search for her and discover a village of trouble, igniting an age old war. Though his physical skills may be lacking, Gabe won't give up. With the help of his friends, he will find a way to save his girl and maybe all beastkind. Humans, bah!

This fun-filled adventure takes middle grade readers into a fantasy world packed with action and imagination.

Spring break has arrived, and Gabe's looking forward to hitting the beach with his best friend. Too bad his girlfriend, Ona, is off to Cradle Rock for hiking instead. When she disappears, Gabe and his friends take off to find her and discover much more than they bargained for.

This is the second book in the Beast World series but can be read--without too much difficulty--as a stand alone.

In this series, beasts are the norm. Gabe, a young teenage goblin, is as normal as any goblin could be. He's adventure friendly, pretty bright, sometimes a little self-concious and more courageous than he's willing to admit. His girlfriend is a ogress, and his best friend is a werewolf--all as natural as any teenage friends could be. The author does a terrific job building a world which despite the fantastical attributes, comes across familiar and natural. Still, it's exactly the fantastical quirkiness of the characters which adds just the right amount of fun.

The pages are marked with adventure pure, gliding seamlessly from one escapade into the next. There's tension, action, secrets and surprises. But the friends manage to work their way through, having to come up with solutions when none seem possible. There's also a little, sweet romance built in, exactly that which fits to the age group and will set off a perfect smile, blush or giggle too.

There are many messages weaved into this book, some more obvious than others. Acceptance and the dangers of fearing the unusual are thoughts which come across clearly, while the value of friendship, self-confidence and maintaining hope glide along a little less conspicuously. It's refreshing not only to watch the characters learn these lessons for themselves, but actively work to teach them to others as the characters already live some of these virtues themselves.

Summed up, this is simply a fun read kids are sure to adore. The magical world draws in and lets the imagination take flight, while keeping the reader glued to the pages until the very end. It's a great read for boys and girls ages 9 and up.