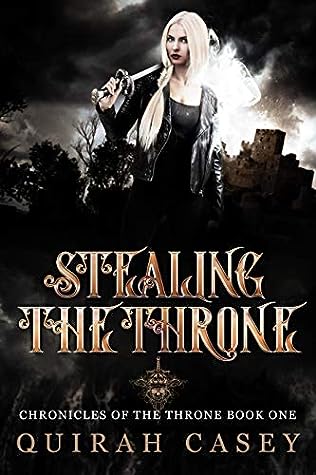 STEALING THE THRONE
Chronicles of the Throne, Book One
by Quirah Casey
Upper YA/NA Fantasy


The people who burned down my old life will regret walking through the ashes.
As far as the citizens of Caelumine are concerned, Princess Amelia Deightyn died with the rest of her family in the burning of the Deightyn Kingdom. Roxanna Delamontee couldn’t agree more. The day her family was betrayed by the people they trusted most, her innocence went up in flames, and her identity as Amelia burned with it. She rose from the ashes as Roxanna, and she’s going to show the people who killed her family how it feels to burn. She’s spent years plotting her revenge, and no one can stop her. Or so she believes until she meets four of her enemies, men who are determined to steal her heart while she’s stealing the throne.

(** There is a short, steamier dream moment, and uses of strong as well as suggestive (and very direct) language.)

Girl power with intrigue and tension make this a read which is hard to put down.Roxanna was someone else, but her family was betrayed, the castle burned and everyone she loved now lies dead. Except for one man, who pulled her out of the flames and has now trained her to seek revenge. By entering the competition to become the Prince's personal guard, she intends to find the perfect time and position to put an end to the family, which eradicated her own. With years of training and more determination than anyone else in the competition, she's sure she can win. But life doesn't let anyone by that easy.While this is a reverse harem, it is slow burn and contains quite a bit of plot to make the aspect more of a sideline theme. The first pages were a bit rough on the writing end, making it hard to sink into but it was only the first couple of pages. After that, I couldn't put the book down. Roxanne is a tough heroine with one goal in mind—revenge. Hate seeps off of her, and understandably so. As is often the case with such strong heroines, there were times that she was a bit much. Her attitude tends to be too harsh, and her decisions not always well thought out. But these became more traits which she needs to improve on (inner struggle) than aspects which damage the tale. It was tons of fun to follow her through these pages.There is tons of intrigue and the secrets are mounting as fast as others are be disclosed. This is what made this a fun read. Action hits every page, and unexpected twists are around every bend. While some characters are pretty black and white, others hang along the sides in their own shadows. This ensures quite a few surprises for the rest of the series, and I'm looking forward to finding out what really happened or is going on.As to the reverse harem romance: there is definitely a clear harem. Of course, there's a lot of 'love at first sight' or, at least, desire. I'm never a huge fan of this, but it works pretty well, in this case. The author has enough going on, especially from Roxanna's end, to keep the men at bay and tension high. There's enough flirting, which often hits with humor and ligthens the read. Even that paces itself in rhythm with the action and leaves the promise of so much more to come.My only complaint would be the editing. There were more than a few mistakes, most of them wrong words or skipped grammar points. I'm still giving this one 5-stars, but it did make me consider knocking it down to four.

Email ThisBlogThis!Share to TwitterShare to FacebookShare to Pinterest
Labels: Chronicles of the Throne, Quirah Casey, Stealing the Throne