Review: Pluto Gets The Call by Adam Rex 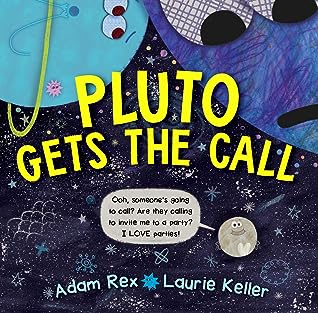 
Pluto gets a call from Earth telling him he isn’t a planet anymore, so he sets out on a journey through the solar system to find out why in this funny and fact-filled romp that’s perfect for fans of The Scrambled States of America.Pluto loves being a planet. That is, until the day he gets a call from some Earth scientists telling him he isn’t a planet anymore! You probably wanted to meet a real planet, huh? So, Pluto takes the reader on a hilarious and informative journey through the solar system to introduce the other planets and commiserate about his situation along the way. Younger readers will be so busy laughing over Pluto’s interactions with the other planets, asteroids, moons, and even the sun, they won’t even realize just how much they’re learning about our solar system!

Planetary fun hits high orbit in this really cute book, which just happens to teach a few inter-planetary facts along the way.

Pluto wants to introduce you to itself but before it gets very far, it receives a phone call from Earth. And not a happy one. The scientists have decided to demote Pluto from a planet to... well, they aren't sure yet. Still, Pluto is ticked. But instead of stewing, he heads off to introduce the other planets (and get some needed, emotional support). And there just happen to be a few surprises along the way...ones that might warm a reader's heart.

This book is a bit quirky, funny, and simply fun. Each planet...and non-planet...Pluto meets has a unique personality. As a read-aloud, it's wonderful, especially when a bit of voice play sets in. The back and forth between the planets holds humor as well as information, making it a sneaky way to learn a few solar system facts.

The illustrations are ones to flip through time and again as they not only bring the planets to life, but offer interesting details and humor too. Young listeners are sure to see the planets in the solar system from a totally new point of view. Plus, it's hard not to feel for Pluto as he tries to come to terms with the removal of his planet status. Even this, however, offers a touching ending with a message listeners can use in their own lives.

Oh, and to round the entire thing off, the last pages hold a jumble of numbers and facts for all of those solar system fans.

My daughter had a ton of fun reading through this book, which means thumbs up from me.

The Author...
Adam Rex is the New York Times bestselling author and illustrator of Frankenstein Makes a Sandwich. His other books include The True Meaning of Smekday, which was made into the hit animated movie Home; Moonday; and School’s First Day of School, illustrated by Christian Robinson. He also illustrated the Brixton Brothers series, Billy Twitters and His Blue Whale Problem, Chloe and the Lion, and How This Book Was Made, all by Mac Barnett, and Chu’s Day, by Neil Gaiman. He lives in Tucson, Arizona. Visit him at AdamRex.com or follow him on Twitter @MrAdamRex.

Laurie Keller is the acclaimed author-illustrator of Do Unto Otters; Arnie, the Doughnut; The Scrambled States of America; and Open Wide: Tooth School Inside, among numerous others. She grew up in Muskegon, Michigan, and always loved to draw, paint and write stories. She earned a BFA at Kendall College of Art and Design, then worked at Hallmark as a greeting card illustrator for seven-and-a-half years, until one night she got an idea for a children’s book. She quit her job, moved to New York City, and soon had published her first book. She loved living in New York, but she has now returned to her home state, where she lives in a little cottage in the woods on the shore of Lake Michigan.