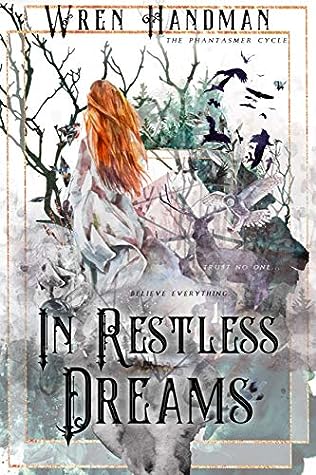 IN RESTLESS DREAMS
The Phantasmer Cycle, Book One
by Wren Handman
Parliament Press
YA Fantasy
293 pages

Sylvia is just a normal girl with huge, normal problems – her mother’s attempted suicide; how to adjust to life on the Upper East Side; trying to make friends in a rich prep school where she doesn’t belong; whether or not to trust the cute boy with the dangerous eyes. She thinks that’s more than she can handle, but she tests the limits of her endurance when she learns that she is the long awaited Phantasmer, a human who can change the fabric of Fairy simply by believing in a new story. Sylvia’s life is thrown off course as two warring Courts, the Seelie and Unseelie, both attempt to co-opt her gift to fight the other Court, which she has to deal with while trying not to get kicked out of school for fighting. And it doesn’t help matters that the fairies begging for her help are both attractive young men – with their own agendas.

Fans of Fairy, the Unseelie and Seelie Courts, and those who love a bit of unsure romance will enjoy this one.

Sylvia is a very usual high school student with a normal life in a small town out West. That is, until her mother tries to commit suicide. While her mother undergoes very necessary therapy, Sylvia and her younger brother move to their father in New York, who happens to be one of the richest and most well-known men in the city. The culture shock isn't an easy one to master as Sylvia is suddenly thrust into a private school with the elite's of the high class, especially when they decide to bully her. Tricked into taking drugs, Sylvia is meets two very strange men while she's high, ones no one but her can see...and even afterwards, she still sees them. Just as she's sure she's going crazy, she stumbles into Fairy and discovers that so much more awaits her. And most of those things are anything but nice and safe. They're down right deadly.

I could give two very separate reviews on this book if it were divided somewhere about a third of the way through. In the first third, we meet sixteen-year-old Sylvia as she's dumped by her boyfriend and immediately are drawn in as her life flips upside down. The writing is pretty well done (with only a few stumbles here and there), and it was fairly easy to fall into the scenes. I was a bit thrown by Sylvia's snark and found her a little unkind at times. The side characters also didn't have the depth I would have hoped for, but still, the entire thing was interesting enough to keep me reading. So, I'd give that section three stars.

It takes over one third of the book before the fantasy really gets going. During the first pages, the Stranger does pop in with his own section every now and then, but it's always very short and doesn't meld into the happenings with Sylvia...making it almost possible to forget magic is supposed to be involved at all. When Sylvia finally does see Fairy, her talents hit suddenly and without a real explanation (unless the accidental drug use was the cause?). The reasoning behind her being born with such powers is never neared upon, which I found a little disappointing.

Once Sylvia is hooked in with the Fairy, the adventure truly begins. Everything she faced with her private school fades away, making the entire drama between new friends and such meaningless...and made me wonder why much of it was necessary.

Anyway, the fairy side is simply a fun read. The author develops the two fae men well done as their two very different personalities add amazing tension and bring even more secrets into play. Sylvia has a lot to figure out and deal with, and none of it is crystal clear. This kept me guessing until the last pages and made every twist and turn fun.

The scenes and imagery are a treat. The world is packed with fantastical details and each set is vivid. The emotions run high in a mix of black and white as the two opposing worlds of Fairy collide. Even the background history, which the author has created, melds in wonderfully and makes for an exciting  and unique predicament. So much happens during this latter section of the book, and it's packed with danger, action, mystery and adventure. The romance adds even extra spice.

All in all, I enjoyed the read and will meld the rating together to form four stars.
on January 26, 2020