Review: The Hunt by Frost Kay

I've got quite the reading pile already...and the year just started! Of course, I let myself be coaxed into reads when I don't even have time. So, this one is a slide in review, which I just had to share with everyone after reading it. 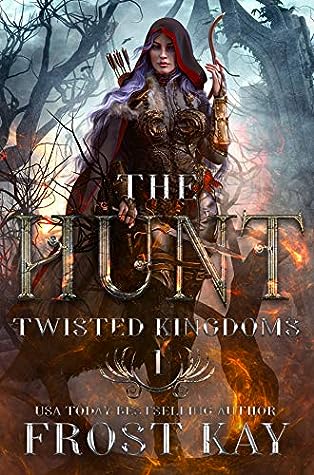 
Death marked her from her very first breath.Being sired by a Madrid is supposed to be a blessing, but for Tempest, it's a curse that leaves her orphaned, penniless, and enslaved to a blood thirsty crown on the brink of war.Found too unruly to become a ward of the court, she's thrust into the care of the King's Hounds - the assassins and warriors responsible for protecting the kingdom. Driven by rage and an oath to avenge her mother's memory, Tempest throws herself into training.But becoming the first ever female assassin isn't enough. Now, she must obtain the heart of her kingdom's most feared enemy - the jester - a deadly shapeshifter hidden in a land twisted by myth and darkness.Revenge is never easy or cheap. Tempest is willing to sacrifice everything to see justice served. Even her own soul and freedom.Enter the world of the Twisted Kingdoms at your own risk where monsters wear pretty masks, good and evil are at war, and fairy tales don't exist. If you love fiery heroines, sexy villains, enemies-to-lovers romance, pulse-pounding action, mafia undertones, and dark fairy tales, you need to discover the new series readers are comparing to Holly Blacks's Cruel Prince and Leigh Bardugo's Six of Crows.

Power and intrigue join with a rush of adventure and danger to form a fast-paced read which is hard to put down.

Tempest lost her mother to a fire and a shape-shifter when she was a young child. Taken in by her bloodline thanks to her stubborn nature, she grows up between the King's warriors and assassins–men who treat her well, become her only family and train her to be extremely deadly. When she turns eighteen and faces her trial, which will gain her the right to join the rest of the Hounds, life takes a very unexpected twist. Sent out on a mission by her King, she finds herself caught in a intricate woven web of deception and lies with no way to know who's telling the truth and who should meet death by her sword.

While the first pages took a bit to warm up to, the story takes off from there. Tempest has a harsh past, which makes her easy to sympathize with, and her hard shell is very understandable when meeting the men she calls her family. These guys alone already drew attention with their wonderful quirks and roughness. Personalities definitely shine in this read, as the author allows even sub-characters to gain richness and reach into the web with strings of their own. It helps to round down Tempest's own spiky personality, which can become extra poky at times and almost off-setting. But thanks to the round of characters involved, the urge to grow extremely frustrated with her is held at bay.

This is not a gentle read, but rather action, violence, fights, death, brutality and danger hit every twist and turn. It's a dark tale but not without its humor to keep things balanced. And things need to stay balanced as the story takes more than a few unexpected turns. While the plot starts out seemingly simple enough, it soon takes all sorts of surprising directions and promises intrigue so thick that it's impossible to know who's actually behind everything or what their true purpose is. Trust is hard won, and even then, can't be counted as golden. This creates a high tension the entire way through.

There's also a strong romance pulling along the main plot. It's a slow paced one, which heads along the enemy-to-lover lines, and promises many more surprises to come in the rest of the series.

This is one for fans of strong heroines, shifters, evil plots, tons of action and hot villains at every turn. The content does remain suitable, at least in this first book, for the entire YA audience.

I received an ARC version.