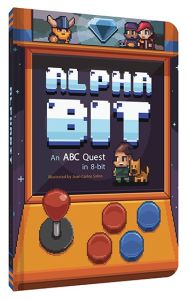 
Inspired by classic video games of the '80s and '90s, this clever board book sets out to level up the ABCs. Within these pages lies an alphabet adventure, rendered entirely in striking 8-bit artwork. Young gamers will love guiding their daring hero through the story to learn new words, discover hidden pictures, and find the missing treasure in an epic quest that will have kids and adults ready to press restart!

Gaming fun and adventure meets the ABCs in a way which will have retro gaming fans excited.

This is a sturdy book, great for young hands that will even take some abuse. The cover already hints at what's to come—an adventure set in 8-bit form, which leads young readers through an adventure with many surprises along the way. Each letter of the alphabet is placed in a box in big, bold font. Then, in true 8-bit form, several words which begin with this letter are listed. Each of these stated things can be found in the illustration on that page.

Now, these aren't your average words, but rather run along the lines of a gaming adventure. Still, young listeners will recognize most of them easily. The illustrations are bright and held to the perfect 8-bit format, presenting characters whose style is immediately identify by anyone who's played these games. Retro gaming fans will enjoy this quite a bit and have a chance to reminisce. To shake things up even more, the book holds a small adventure along the way. Everything from ghost attacks to ice worlds to health points and more come into play as the characters make their way through the pages as if they were going through a game.

It's cute, well illustrated and will definitely remind of games from the 80's. I'm not sure, however, who the intended audience really is. While it's said to be for kids 3 to 5, the age group will not be able to identify closely with the 8-bit style. And while adults will remember exciting, gaming moments, the ABC end won't really interest them. But it's still a clever book which is fun to gaze through.