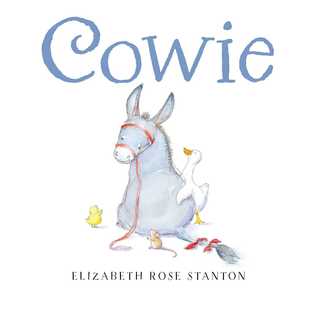 Cowie is a donkey who feels like a cow on the inside. Will his friends help him make his dream come true? Find out in this sweetly told story about discovering your true self.Cowie was born a donkey but he knows he’s meant to be a cow. He wants to be a cow. Cows can graze in the meadow all day long and no one asks them to carry heavy packages. So, he stands with the cows in the barn but nothing happens. Will his dream ever come true, he wonders. Can Mousie and Duckie help Cowie feel happy in his own skin?

Love and patience fill this book as a donkey heads out on an impossible journey.Everyone calls this donkey Cowie because he would like nothing more than to be a cow. He gazes at them every day—how they eat and enjoy the pasture. No one every asks them to haul loads or work. So, he decides it's finally time to become the cow he wants to be. But is it that simple?Cowie is a wonderful donkey, which is almost impossible not to love. Especially thanks to the illustrations which give him such a warm, cute and sweet appeal. His longing to become something he isn't is also a problem every young listener faces at one time or another. So, when he heads to the other pasture and stands between the cows, it's easy to root for him and hope he finds a way to meet his dream.It's sweet that none of the other animals scoff at him or even try to deter him from his goal. Instead, they stand at his side and encourage him, supporting him any way they can. I was a little surprised how the book took a certain direction about halfway through, but it adds humor and makes the book into a fun read-aloud, which will draw more than a few smiles from listeners.The message is fairly clear. Cowie does end up with a smile on his face at the way things turn out. However, I'm not sure what the result is even after going through it a few times. In other words, it's a bit open, leaving a little left for the listener to decide... and that opens up to discussions or thinking. Which is never a bad thing.The illustrations are lovingly done and fit the story perfectly. Listeners will enjoy gazing at these and fall in love with Cowie because of them. In other words, it's a well-balanced book with lots of goodness packed inside.

Elizabeth Rose Stanton began her picture book writing and illustrating adventure a few years ago, after a brief career as an architect, and a long career as a parent and fine artist. Her debut book, Henny, was awarded an American Library Association Booklist star and was named as one of the best books of 2014 for children by The New York Public Library. Elizabeth grew up in New York and now lives in Seattle with her husband and trio of Scottish fold cats.
on January 07, 2020