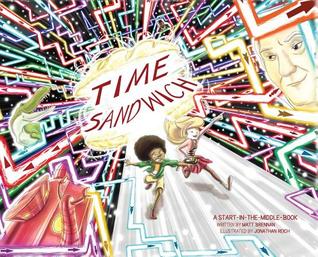 
When Tuckie and Huggs discover a time machine, they have no idea of the adventures they're about to have - but their future selves do! They'll travel to the past and see dinosaurs, disco and President Millard Fillmore! They'll jump to the future to experience cool roller coasters, killer robots and the Time Vortex! And they'll keep running into themselves along the way. Don't worry - it all makes sense in the end! But will they be able to get back to their own place and time?
In this unique tale, instead of starting at the beginning, the reader starts in the middle of the book. As our heroes travel forwards and backwards in time, the reader flips pages forwards and backwards, following timelines, to keep up with them.

This is a back and forth, all over the place, flip those pages adventures, which keeps the fingers moving in the same excited pace as the adventure itself.

Tuckie and Huggs discovers an odd device in the garden. A sudden pull of the handle and off they go through time! Many adventures await them as they zip and zap and zip again. Where they'll land next is as unexpected as where they had last been.

This is an original, time travel story, which takes a picture book format but is definitely for middle grade readers. The entire thing is done in a comic book form, with the text snuggled into the illustrations. But it's the flip-flop, back and forth which gives this book its original flare. While the story starts on the beginning page....kind of...it then quickly sweeps to the middle and continues frontwards and backwards from there.

In a way, it reminds of the 'Choose Your Own Adventure' books, but in this one, there aren't any choices to be made. Instead, the story continues by following colorful arrows and lines through the pages until the followed 'path' ends in a story box. The reader finds out what happens next before zipping away and following the next arrowed and colored line again through the pages until landing somewhere else. About halfway through the story...and by story, I don't mean physical book...a time vortex hits and colored paths shoot back and forth in a frenzy. The reader has to take care to stick on the right color path in and out of the spin so they can continue the story. Sometimes, the color lines get a little confusing (there are quite a few to follow along the bottoms and tops of the pages), but as long as the reader pays attention to what they're doing, they'll get through.

The adventure itself is fun. There's not really a message to the entire thing, nor is there much of a plot outside of the excitement of meeting dinosaurs, aliens, and all sorts of suspenseful situations. But that's more than enough. It's a fun read, very original, and worth a try, especially for those more reluctant readers who get bored when reading a 'simple' book. 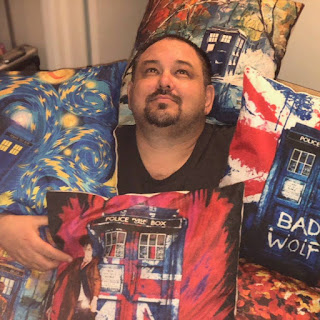 Matt Brennan has always been obsessed with time travel, whether it's altering the past in order to change the future, or a closed time loop where everything that's going to happen has already happened. He lives in Burbank, CA with a stuffed Klingon Targ. This is his first book.
https://www.amazon.com/Time-Sandwich-Start-Middle/dp/0692125876/ref=sr_1_1?ie=UTF8&qid=1537204821&sr=8-1&keywords=time+sandwich+matt+brennan
https://mattarama2000.wixsite.com/website
https://www.facebook.com/Start-in-the-Middle-Books-230741110850540