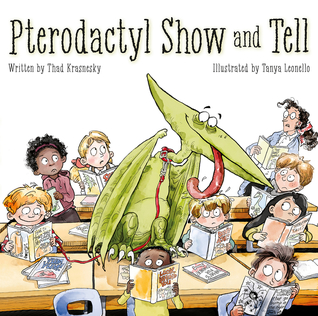 When a boy brings his pterodactyl to school for show-and-tell, hilarious havoc ensues. The creature's delightfully demented antics, the kids' expressions as they try to avoid the hungry pterodactyl, and the out-of-control imagination of the boy yield a wild and wacky romp.
Kids who dig dinosaurs will devour this preposterous pterodactyl tale written in rhyming couplets and teeming with edgy school-age humor and giggle-inducing illustrations.

Giggles are guaranteed in this silly yet somewhat edgy story of a pet many kids would enjoying owing...at least, in their dreams.

It's show and tell, and this boy has the perfect thing to bring to school—his pet pterodactyl. The large creature quickly gains all the attention, and not few uncertain looks as he goes from class to class. Nothing runs smoothly, and kids as well as teachers are constantly afraid the pterodactyl might devour them. But the boy is oblivious to everything.

This is a fun read, packed with imagination. The idea of taking a pterodactyl to school already will make young listeners curious. From the very first page it becomes clear that things aren't going to run smoothly, especially when the boy barely manages to keep his pterodactyl from devouring two kids before the first bell! But this book doesn't overstep any boundaries, nor does it turn into a creepy or scary read. The pterodactyl might have hunger on his mind, but there are too many other things going on if he does. This makes for a very edgy read, where snorts and giggles slide right along.

The illustrations portray the pterodactyl as cute and friendly while still keeping him big and just a tad bit menacing. It's not enough to scare or make young readers not wish for their own pterodactyl (he is a lot of fun), but combined with the uncertain and scared looks on the characters' faces, a little bit of fear comes through. It's makes for a lovely mixture, especially since there's a lot of silliness built into the scenes as well. It's enjoyable just to look over the illustrations and get a taste for the nonsense again and again.

This book makes for a fun read, especially for dinosaur fans. Unfortunately, there isn't much development in the situation, making the expressions of the other characters always uncertain and afraid. But it's still a read young listeners with enjoy.

Thad Krasnesky is the author of I Always, ALWAYS Get My Way, and That Cat Can’t Stay, illustrated by David Parkins. He considers himself a writer of children’s stories trapped in the body of an army major. He served five tours of duty in Iraq and Afghanistan as an active duty intelligence officer in the US Army.
He lives in Lansing, KS, and this is his third picture book.

Tanya Leonello has an MFA in medical illustration, and specialized in scientific illustration for over 15 years. Her second career as a mother provided inspiration to create art for children’s picture books. Tanya lives in Dexter, MI.