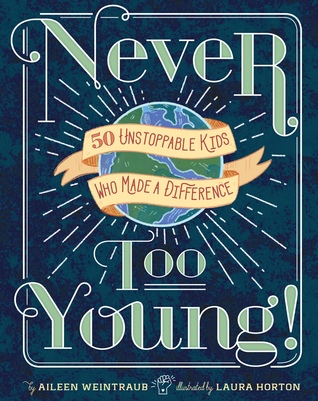 
Anyone—no matter how young—can make a difference! Meet 50 incredible kids who had a positive impact in their communities . . . and the world.

This collection of 50 kids who made a difference in the world before they became adults and inspires kids to chase their dreams, proving they can change the world.

Fifty figures are presented in these pages, each one reaching a major accomplishment which greatly influenced the world around them before they hit the age of eighteen. Some are historical, while others are still alive today. Some are even still kids. The range in accomplishments is vast. From performing arts to science to philanthropy, these kids have made an impact in every aspect of life. They also come from every where across the globe—Africa, Asian, the Americas...there are no boundaries.

The book begins with a quick table of contents, making it easy to find a specific person. However, they are not in any particular order. There's a quick introduction from the author, which makes it clear this is a book to empower and inspire kids. After raising the excitement to dive in, the reader meets the fifty 'kids' on each of the following two-page spreads. The name of the person is in bold type directly followed by the area they made an influence in. Then there's a one page description of who they were, their special qualities, what they did, why they did it, and what influence they had. On the other side, there's a lovely illustration of the figure as a child, the dates they were alive (or born), as well as a famous quote from them. At the end, a 'What Now?' page again inspires readers to go out into the world and try their best without worrying about only being a kid because if these other kids can change the world, so can they. Last but not least, there's a section of sources listed.

The figures in these pages represent a kaleidoscope of possibilities and make it clear through facts that kids can make a difference. It doesn't matter what area they are talented in, which part of life their ideas hit upon or even from which circumstances they come from. All of these children gave their best to work at whatever activity they found important and didn't give up. Granted, sometimes a pinch of luck was involved but that was by no means the main factor and for many, not even involved. The texts are never boring but bring each figure to life and make their dreams as well as accomplishments clear. It's great for readers to thumb through time and again, and each time to learn something new.

This is one of those books which should be available to kids—school libraries, classrooms, and homeschools. It hits home and makes kids realize that they aren't necessarily too young to accomplish their dreams. Instead, they should chase them.

Aileen Weintraub has written more than 50 books for children, as well as numerous essays and articles for Scary Mommy, the Manifest-Station, and Kveller. She lives in New York. Visit her online at aileenweintraub.com.