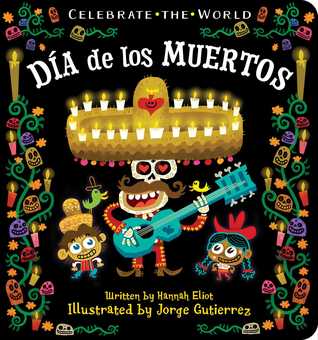 Learn all about the traditions of Dia de los Muertos with this second book in the brand-new board book series Celebrate the World, which highlights special occasions and holidays across the globe.
At the end of October each year, it’s time to celebrate an ancient tradition: Dia de los Muertos! With vibrant illustrations by Golden Globe–winning Mexican illustrator Jorge Gutierrez, this festive board book teaches that Dia de los Muertos honors ancestors and loved ones who have passed. From sugar skulls to papel picado, this is a holiday that truly commemorates the cycle of life.

This is a great way to introduce children to a holiday they may not have heard of before and discover more about the world around them.

With 24 pages, this is a sturdy little board book, perfect for small hands. The cover and pages will hold up to small accidents and a bit of roughness. The traditions and reasons for celebrating Dia de los Muertos are explained clearly, while still allowing the excitement the holiday brings to still filter in. The text uses simple enough vocabulary for kids to understand, while still allowing some lesser known, cultural words to filter in.

The illustrations are as expected from Jorge Gutierrez—a real treat. He has brought the holiday across in a vibrant, exciting way while still keeping the foundations of the celebration clear. There are many small details in the drawings to make sure children come back and investigate them on their own.

While there are many great things to this book, I'm not sure it's fitting for the board book age group. The text is fairly long for the youngest listeners and the illustrations, while beautiful, don't always depict the situations clear enough for board book audiences to understand. Slightly older listeners/readers would slide into these pages without a problem, but unfortunately, the older age group (who would enjoy this book the most) will most likely not be willing to pick up a board book.

Still, it's a wonderful story which does a terrific job in introducing Dia de los Muertos to kids.

The Author...
Hannah Eliot is a children's book editor who lives in Manhattan, New York. Her faovite activities include editing (of course), writing, painting, and doodling all over every piece of notebook paper she uses.


The Illustrator...
Jorge R. Gutierrez  is a Mexican animator, painter, writer, and director who, along with his wife, Sandra Equihua, created the multiple Aniie and Emmy Award-winning animated television series El Tigre: The Adventures of Manny Rivera for Nickelodeon. Born in Mexico City and raised in Tijuana, Guierrez has completed various films, cartoons, illustrations and paintings exploring his love affair with Mexican pop and folk culture. He won two Annie Awards (Best TV Animated show & Best TV Character Design) and on Emmy Award (Best TV Character Design) for El Tigre. He was also nominated for an Annie for Disney's The Buzz on Mattie. Most recently, he cowrote and directed the animated feature The Book of Life, which earned him a 2014 Golden Globe Award nomination for Best Animated Feature Film.