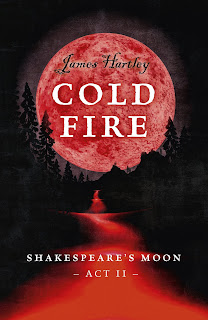 
Set in the magical boarding school of St Francis', Cold Fire centres around a group of teenagers who become involved in the tale of Romeo and Juliet in this contemporary re-telling of the classic story. Meanwhile, four hundred years earlier, a young teacher from Stratford Upon Avon arrives at the school. His name is Will... From the author of The Invisible Hand comes the second book in the spellbinding Shakespeare´s Moon series.
Purchase Links
Amazon UK - https://www.amazon.co.uk/Cold-Fire-Shakespeares-Moon-Act/dp/178535762X
Amazon US - https://www.amazon.com/Cold-Fire-Shakespeares-Moon-Act/dp/178535762X

Life at a modern boarding school weaves through an intricate web of love, mystery and teenage uncertainty in this fresh and slightly edgy retelling of Romeo and Juliet.

This isn't a simple retelling of Romeo and Juliet in more modern times, but rather the author has created a mystical, mysterious and an emotional tale which brings the Shakespearean masterpiece to a level fitting modern day minds. Set in a boarding school in Scotland, the story concentrates not only on Gillian and Romeo but rotates around an entire group, allowing for several stories to flow simultaneously. Included in this is the tale of a teacher from 400 years before and his experiences, which shadow similarities to that of the main characters. It's an intriguing mix, which adds just the right amount of mystery and magic to grab and hold without becoming overpowering.

I didn't read the first book in the series, which might have explained some foggy points surrounding the school. But this was by no means an issue. It was easy to dive into the characters and plot, and can be read as a stand alone without any problems. The first pages grab and let Gillian and some of her problems as well as personality come to light. The next chapters continue with a gasp of boredom into the next scenes and keep the pace high. The story includes that of several characters, a switch which runs smoothly and without confusion. This constant motion, however, did create a little lack of character depth, especially in the first chapters. But the pages hooked, and it was no problem to read this in one sitting.

Summed up, this is a lovely retelling which offers modern day teens a refreshing and grabbing way to dive into a classical story. It will be interesting to see which of Shakespeare's tales the author brings life to next. 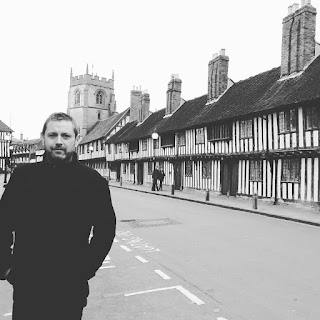 James was born on the Wirral, England, in 1973 on a rainy Thursday. He shares his birthday with Bono, Sid Vicious and two even nastier pieces of work, John Wilkes Booth and Mark David Chapman.

His mother was a hairdresser with her own business and his father worked in a local refinery which pours filth into the sky over the Mersey to this day. They married young and James was their first child. He has two younger brothers and a still-expanding family in the area. As an Everton fan he suffered years of Liverpool success throughout the seventies and was thrilled when his father took a job in Singapore and the family moved lock, stock and two smoking barrels to Asia.

He spent five fine years growing up in the city state before returning to the rain, storms, comprehensive schools and desolate beauty of the Scottish east coast. Later years took he and his family to baking hot Muscat, in Oman, and a Syria that has since been bombed off the surface of the planet.

James lives in Madrid, Spain, with his wife and two children. 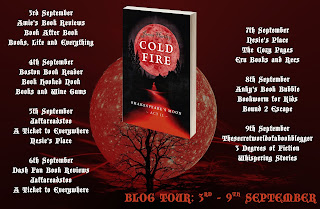 Win 5 x Signed copies of Cold Fire with a special tactile pen (Open Internationally)
*Terms and Conditions –Worldwide entries welcome.  Please enter using the Rafflecopter box below.  The winner will be selected at random via Rafflecopter from all valid entries and will be notified by Twitter and/or email. If no response is received within 7 days then I reserve the right to select an alternative winner. Open to all entrants aged 18 or over.  Any personal data given as part of the competition entry is used for this purpose only and will not be shared with third parties, with the exception of the winners’ information. This will passed to the giveaway organiser and used only for fulfilment of the prize, after which time I will delete the data.  I am not responsible for despatch or delivery of the prize.