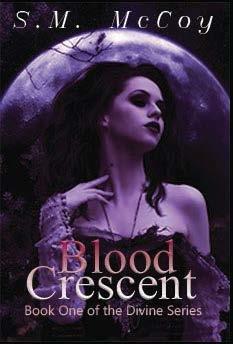 BLOOD CRESCENT
Book One of the Divine Series
by S.M. McCoy
Broken Books
September 21, 2018
YA Paranormal

A missing mother. A magical birthright. Can she uncover the secrets of her family legacy before the bloodline runs dry?

Sixteen-year-old Crystal Dylan thought magic only existed in storybooks. But everything changes when she finds out her long-departed mom isn’t dead: she was stolen away by the same power-hungry league now hunting her own enchanted blood. In search of answers, she must make sense of a hidden mystical realm and two mysterious protectors.
Victor is more than just the boy-next-door. As a shifter, he’s lost track of the many lives he’s led and the memories of his true self. But as he stands close to the beautiful Crystal, he can sense his past coming back into focus. So when dark forces threaten to drain Crystal’s powers, he may just have to risk an enchanted kiss that could save her life… or seal her fate.
With enemies closing in, Crystal must find her mom and uncover her magical destiny before her powers fall into the clutches of evil.
Blood Crescent is the first novel in the exhilarating Divine Series of YA paranormal fantasies. If you like hidden magical realms, fresh new takes on vampire lore, and heartfelt journeys of self-discovery, then you’ll love Stevie McCoy’s spellbinding coming-of-age tale.
Add to Goodreads 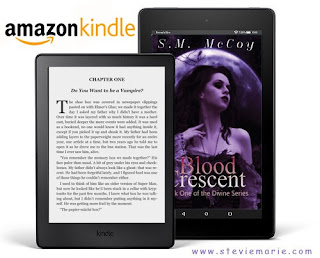 Emotions seep from every page in a paranormal story with a slightly different feel, one that makes the monsters as if they might be real.

Crystal's life isn't clear even to her. Her mother disappeared long ago...her father, who knows. She's grown up with a guardian who has her fingers in auras and spiritual plains, one Crystal doesn't fully get or even believe. But if she ever thought her life could be normal someday, this idea is quickly swept aside when a bite mark appears on her throat and her inner energy is being drained. What she thought was fantasy crashes her reality full force as she learns that there are dangerous creatures out there, ones than not only captured her mother but now, want her.

This was a bit of a battle to dive into. The first chapters are written as if in a haze. Crystal's life isn't right, but it's not clear how outside of the fact that her mother disappeared and that she isn't feeling herself. But holding on through this beginning is worth it as the story does shift into a clearer and more tension filled gear. Crystal lives in a world which is so much more complicated than she knows, and it's these multi-layers which are being laid in this first book with a promise to shoot off in the rest of the series.

Crystal's life is being drained, leaving her a bit weak, hazy and uncertain of things. This holds through the book, taking away the usual clarity in stories and instead, allowing the emotions to take over. The beginning doesn't hold much dialogue but rather sticks heavily to Crystal's head. This makes it a bit sluggish...even later on...but when the dialogue comes, it sits. The other characters are intriguing, although it's not clear what or who or which goals some of them have for much of the book. I would have liked to see a bit more solid information and situations to ground all of it, but then, I can imagine other readers might enjoy this hazy atmosphere as they can sink into and experience Crystal's confusion up close.

There is a lot going on in the plot and only dips and dabs drip through, a little at a time. But it's clear that this is a rich, fantastical world on the border of reality as we know it...and it's exactly this which makes the book a, hopefully, basis laying beginning to an exciting adventure.

Stevie Marie is the author of young adult paranormal fantasy and the Divine Series. Born within the apex of another universe, where magic flows like leaky faucets, and forged from the fires of the Underrealm she dug her way to Earth and reluctantly participates in human society, secretly returning to her home world to relay the stories of her monsters, and the troubled love of her people. When she isn’t writing she’s crafting clothing in her sewing room, cuddling her significant-other creature, or pretending to adult by managing a portfolio of properties for an accounting business in the rainy city of Seattle, Washington.
·  Website: http://steviemarie.com/
·  Goodreads: https://www.goodreads.com/author/show/5153248.Stevie_McCoy
·  Twitter: @authormarie