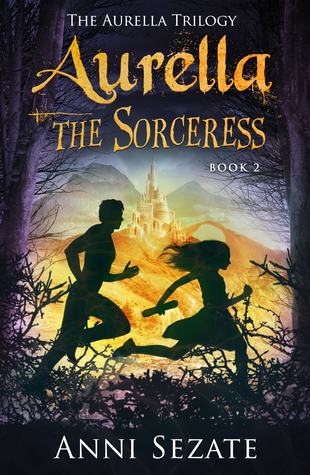 What do you do when your refuge is not the haven you imagined?
Aurella and Mavic have escaped a witch hunt in Dovice, only to discover that Rashtica has also been corrupted by a wicked king. Unlike King Slathgar, this king doesn't kill powerful people, but collects them for his army. No one is safe from forced recruitment, not even children. Though Rashtica is full of witches and warlocks, magic is rarely done in public for fear of being spotted by one of the king's knights and forced into servitude. Once again, Aurella must hide her power or risk capture.

This book takes a trip into a rich and exciting fantasy world with characters to befriend and root for the entire way through.

Note: This is the second book in the series. It isn't too difficult to get into the story and understand what is happening without reading the first book, but it does continue the adventure from where book one left off. So, I would highly recommend starting this series in the beginning.

Aurella and Mavic have escaped their home country after being hunted down and are now on a quest under the Queen's orders to find the heir to the throne. They soon find themselves taken into a home with a loving family, are attending school and even now fit in considering everyone is a witch or warlock and no humans are around—a safe environment they've only dreamed of before. But strange earthquakes shake the country more and more often. Everyone knows it's the king's fault. Plus, his knights are hunting down talented magic wielders and forcing them to join the king's forces. Aurella and Mavic discover that not only may then be in even more danger than before, but there's so much more going on than they ever thought possible.

This is an amazing series! (And this isn't something I saw very often). The author has created a gripping world with characters who are easy to connect with and soon find a place on the reader's side. There's never a dull moment as Aurella and Mavic face tense situations ranging from bullying, lies to action packed hand-to-hand combat. Layers of intrigue keep ever twist and turn bringing an unexpected surprise, and each and every character carries a personality and past of their own. It's a book to get lost in and wish it never ends.

Aurella is an terrific heroine. She packs a punch when necessary but is by no means perfect. Her powers are strong, but she has a lot to learn. Sometimes she wins, often it's a close call and more than once, she can't make it through. This makes every confrontation exciting, especially since it's not about her defeating all foes on her own. She has a true-to-the-end friend at her side...which doesn't mean that they don't get into each other's hair at times. And she discovers others who help her along the way.

There is a lot of heart in the tale, not only through messages or Aurella's good sense of wrong and right, but rather through the interaction of the characters themselves. The characters bicker, laugh, joke around, grow frustrated, panic, tire, get on each other's nerves and love each other to the end. And it's this which makes it so easy to connect to and dive in.

Summed up, this is a fantastic read for fantasy friends who love magic, political intrigue, difficult quests, horrible evil opponents, and exciting worlds. Especially readers ages ten to fourteen will feel at home in this book.

Debut author Anni Sezate is an elementary school teacher from Gilbert, Arizona. She received her education degree from Arizona State University, though she spent a semester living out her acting dreams as a musical theater major. Anni is your typical right-brained lefty who spends most of her time reading, writing, drawing, and singing way too loudly to Broadway soundtracks. Anni is a proud daughter, sister, aunt, and Ravenclaw (Thunderbird, if we’re being technical).
https://annisezate.com/