The Thirteenth Moon by Melissa Volker 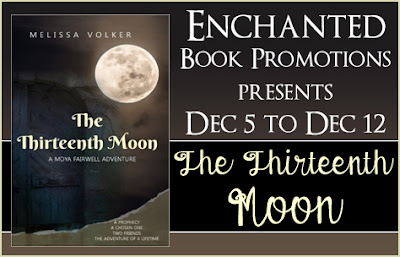 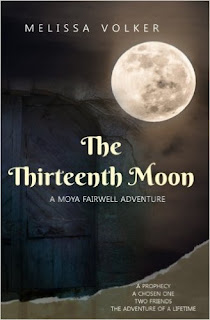 Moya Fairwell has just turned 13. Her classmates think she's weird. Her odd, loveable weed-eating grandmother has been talking in riddles. A ring on her finger itches like crazy, and she's been hearing a strange voice call to her through the trees.
But when the full moon flashes green, and the clock strikes thirteen, and a boy with white hair finds himself on her doorstep in the middle of the night -- then things really start to get weird.
Join Moya Fairwell and her new friend, Fritz, as they journey to the wondrous, magical land of Rimorr. There they discover amazing creatures, fight fantastic monsters, and hopefully protect the balance of good and evil, fulfilling the prophecy of...The Thirteenth Moon. 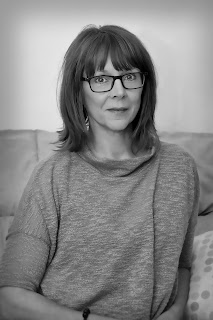 Melissa Volker started out life as an actress, studying at New York University, and the Strasberg Institute. She worked with a theater focused on arts-and-education, bringing production workshops into schools. But after more than a decade living as the struggling artist in NYC, she wanted a saner life, and moved to Boston.

There she met her husband, and they had their son (now fourteen). She was always writing, but after leaving acting behind there was a creative void. The writing filled that.  She also began exploring photography, finding that sometimes a story or moment wants to be capture in words, other times it is better told visually.
She has two literary fiction novels, "Delilah of Sunhats and Swans" which won a 5 star Reader's Choice award, and a collection of short stories inspired by The Great Gatsby, living as a sensitive starving artist, and surviving NYC entitled, "Still, Life: a collection of echoes."
"The Thirteenth Moon: a Moya Fairwell adventure" is her first young adult, fantasy novel. Whimsical, silly, and full of intense magic she has been called a cross between C.S. Lewis and J.K. Rowling. If asked who the book is appropriate for, she'll say it's for anyone who can enjoy it -- regardless of age!
The book has a companion website with a "secret room" that can only be unlocked with a password from the story. Once in, readers can continue exploring the world of Rimorr, including the mythology, the creatures and more.

Email ThisBlogThis!Share to TwitterShare to FacebookShare to Pinterest
Labels: A Moya Fairwell Adventure, Melissa Volker, The Thirteenth Moon, YA Fantasy