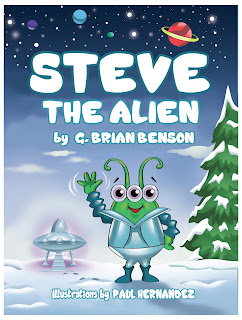 
In this fun and empowering rhyming children's book, Zeke encounters more than he bargains for while walking to school when a lovable space alien named Steve unexpectedly visits him on Earth while on a grand scavenger hunt through outer space! Young readers will enjoy this fun rhyming journey that teaches them the importance of sharing and to be accepting of new friends.


Imagination takes flight in this colorful picture book for kids ages three and up.

Zeke, a young boy, has quite the adventure while trudging through deep snow. What he believes to be a rock shooting through the sky turns out to be a spaceship. Inside, is a perky little alien named Steve. And this alien has a strange request.

The title and cover on this one really grabbed my interest and that of my son. An alien named Steve?-The idea demands a smile.

Four lines of rhymed text accompany a large illustration, creating a reader friendly layout, especially when used as  a read aloud. The wording is fitting to the age group and is peppered with little bits of humorous banter along the way. The rhyming flows well, although it overpowered the story at times and might have been better without. Still, it's fun to read with quirky moments which left my son giggling. The ending had us both wishing to shoot off into the stars with the cute alien but left behind a little emptiness as if a last bit of the adventure was still missing instead. Perhaps, that's not the end of Steve, though.

The illustrations go nicely with the story, bringing the whole thing to life. They are simple but still hold enough hold enough detail to invite young readers to flip through them again and again. Epecially Steve comes across nicely and is an alien to hug.

There are several messages hidden in the story, but they never come across forced or preachy. Rather, they flow with the plot as a gentle whisper.

Summed up, this is a cute picture book with a fun alien and is sure to make a good read aloud to float away to star-filled dreams. 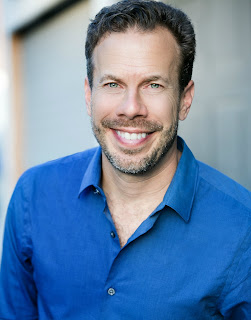 G. Brian Benson, founder of Reawaken Media, is an award-winning author, actor, filmmaker, and inspirational speaker. His mission is to wake up the world with conscious, thought-provoking media that inspires. As a 4x Ironman triathlete, Brian knows the value of hard work and never giving up on his dreams, a message he shares with audiences through each of his creative talents. A parent himself, he understands the importance of creating positive, fun, and empowering literature for children to thrive. Brian lives in Los Angeles, CA where he keeps his gaze skyward.  To discover more please go to www.gbrianbenson.com

Other Links
Website -
www.gbrianbenson.com
TEDx Talk-
https://www.youtube.com/watch?v=lOXbY8vfaGA
Posted by T Drecker at 8:05 AM