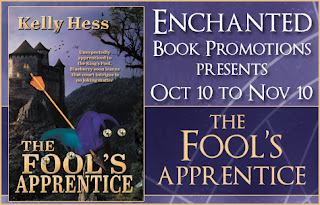 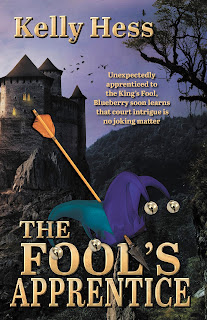 In the kingdom of Dragon's Launch, young Denrikk's aspirations of becoming a knight are dashed when he is instead apprenticed to the king's fool. Embarrassed and devastated that his new position will ruin all hopes of winning the hand of the girl he loves--the princess Alendria-- Denrikk reluctantly begins training under his new master, Fumbles, the king's aging fool. He quickly learns, however, that being a fool in Dragon's Launch is much more than juggling and laughing like a hyena.
But when a shocking murder within the castle walls shakes the palace, all evidence points toward Denrikk. Now, with his new skills, a bit of luck, and the help of some unlikely friends, the fool's apprentice must race to prove his innocence, all while evading capture.

The days that followed, if not quite happy ones, were at
least bearable. Denrikk continued to demolish fruit all over
the palace, but his juggling did improve. Before long he was
able to keep two apples twirling in the air for up to a minute
before, plunk plunk, he left two piles of applesauce in his wake.
One day, after losing two more apples to the unyielding
ground, a cry rose up from behind him. “Stop that!” came
the ringing voice of Mistress Dunsworth, the kitchen master.
“Stop right there!”
Denrikk turned and waited for the stern woman to
approach. “I don’t know what grievance you carry against
edible fruit,” she barked, “but by my estimate, you’ve destroyed
enough apples to feed the entire kingdom. Whatever wrong
these helpless victims have done you, certainly your vengeance
has been carried out by now!”
“I’m sorry, mistress, but my master has instructed me to
practice my juggling during all waking hours.”
“Your master?”
“Yes, mistress.” Denrikk nodded. “Fumbles, the fool.”
“Hmmpf,” she grunted, and without another word she
stormed off in the direction of Fumbles’s tower. Denrikk
followed after her, curious to hear the exchange.
“Is there nothing else that can be juggled that won’t end up
attracting flies?” Dunsworth was saying as Denrikk entered the
tower. “Couldn’t the boy throw balls in the air just as easily?”
“Yes,” Fumbles reclined in his chair leisurely. “Too easily
in fact,” he said. “Apples are imperfect. I need him to get
used to handling objects that aren’t perfectly balanced the
way balls are.”
“Hmmpf.” Dunsworth turned and exited the tower, casting
a shrewd eye on Denrikk as she passed.
Fumbles smiled. “Well, you’ve got her in a rumple, haven’t
you?”
“I’m sorry, sir,” Denrikk said. “But I am improving. I’ve
only dropped around twenty so far today.”
Fumbles waved a hand. “Don’t worry. Apples are the king’s
favorite food. He has acres of trees. There’s no risk of an apple
shortage any time soon.”
A moment later, the front door of the tower slammed open
and Mistress Dunsworth stomped back inside. 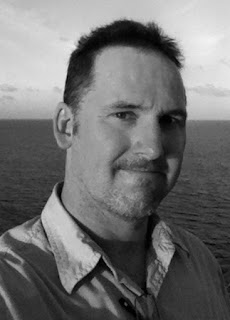 Kelly Hess is the author of the BlackMyst Trilogy. Kelly grew up with a love of reading science fiction and fantasy which inspired him to write his own books for young readers. He lives in Vacaville, California with his wife and son where he is currently working on his next adventure.

Email ThisBlogThis!Share to TwitterShare to FacebookShare to Pinterest
Labels: Kelly Hess, The Fool's Apprentice, YA Fantasy