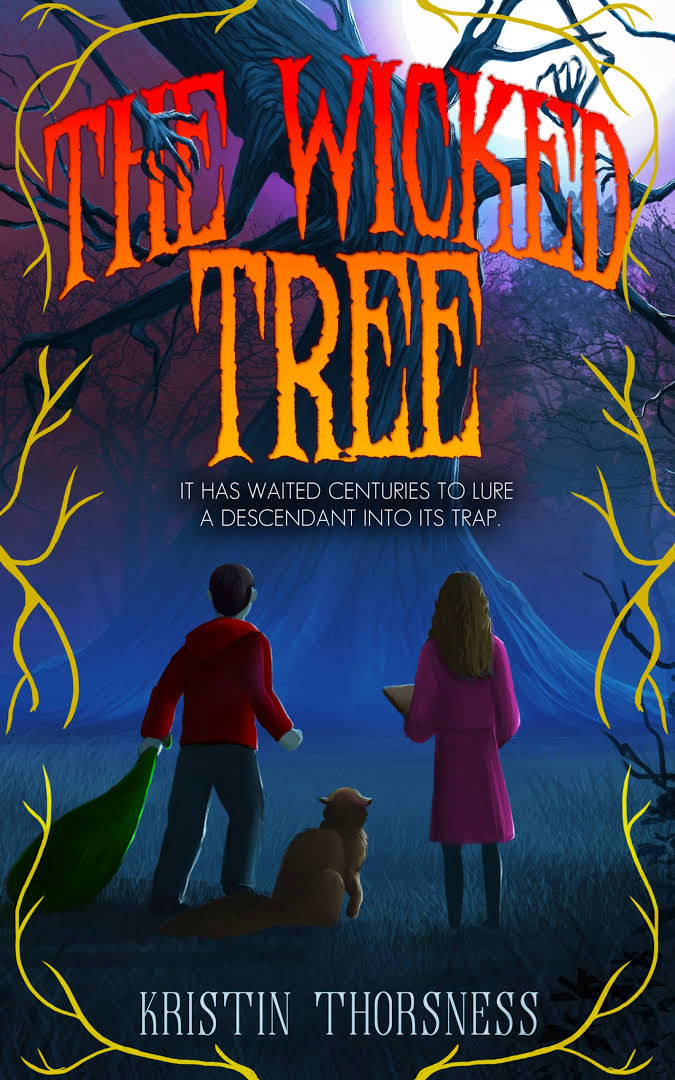 
Deep in the woods, a gnarled tree grows. Its thick, black trunk twists angrily up into the night sky. Held in place by the magic of a long-ago patriarch, it has waited centuries to lure a descendant into its trap.
Eleven-year-old Tavorian Kreet hates it when money troubles force his mom to move them in with his great-grandmother – though the historic house and grounds are pretty awesome. Tav is told to stay out of the estate’s woods, but he can’t resist the chance to explore.
After Tav’s first trip into the woods, he begins to have strange dreams about a supernatural tree. The dreams start out pleasant, but soon grow dark and menacing. On a dare, Tav ventures further into the woods with his new friend Harper, and they meet a mysterious, mute boy named Edward who lives in a decrepit cabin there. Though he’s unable to communicate where he came from or why he lives alone, in clear distress he scrawls two words: Bad Tree.
Tav knows what it’s like to be afraid. If he’d been brave enough to act four years ago, he could have saved his dad from the fire that took their home. But he wasn’t, and he’s been trying to redeem himself since. Now Tav is determined to help Edward. He enlists Harper, and together they search the estate for clues to Edward’s identity and how to help him.
While searching, Tav and Harper find antique photo albums, ancient diaries, and a secret laboratory. They piece together the Kreet family history, and discover a curse that’s been waiting generations for an heir. Tav’s dreams grow more ominous, and he realizes time is running short. To save himself and his friends, Tav must go to the heart of the woods, find the Bad Tree, and confront an evil magic before it consumes him completely.

Spooks, mystery and heart make this into a read to get lost in.

Tav and his mother move back to the historic, family house. Not only are moves always a challenge, but this one includes living with relatives, who each of their own quirks. Getting settled in isn't Tav's only problem as a creepy mystery involving the surrounding forest unfolds. Together with his maybe new friend, Harper, secrets come to light...and they aren't good ones. Soon, Tav finds himself caught up against a dark evil, which threatens to consume him like those before him.

This is a fun read, full of spooks, chills, and humor too. Tav is a bit unsure about himself and has a rocky start to his new life. It's easy to feel for him as he tries to come to terms with the new situation, and still, work through his own father's death. His insecurities and panic are easy to understand and sympathize with, but his determination and good heart make him easy to root for until the end. Add in the building trust of a true, blue friendship, and it's a read which connects with the intended age group.

The author keeps the pace rolling as Tav's issues mold from familiar ones to the more paranormal, spooky kind. The mystery unfolds bit by bit and lets the tension level remain high. It's hard to guess where everything will go next. The addition of a pinch of humor keeps the characters fun, while the creepy situation grabs more and more.

It's a fun read, which guarantees surprises along the way.