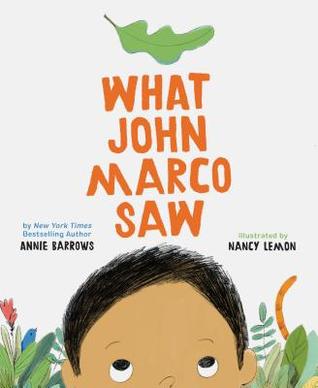 
From the bestselling author Annie Barrows, What John Marco Saw is a captivating tale that celebrates the importance of slowing down.Sometimes the smallest people have the biggest things to say: John Marco is small and everyone around him is big and busy–too busy to stop and listen. The thing is, John Marco is busy, too! He's busy noticing and exploring the world around him. Maybe everyone should slow down and pay attention to John Marco. If they do, they might witness some the incredible things John Marco sees.• A stunning display of Barrows talent for creating stories that speak directly to young readers• Features bright and richly illustrated pages that focus on John Marco's perspective and helps little minds connect with the story• Annie Barrows has written many books for children, including the New York Times bestselling Ivy + Bean series—which has sold more than 5 million copiesFans of Hungry Jim and What Can a Citizen Do? will also enjoy the charming illustrations and sweet storylines found in What John Marco Saw.• Great family and classroom read-aloud book• Books for kids ages 3-5• Books for preschool and kindergarten students

Being small and going unnoticed flips into an adventure with discoveries, humor, and a situation which many younger kids can relate to.

John Marco is small and the youngest in his family. Everyone else is bigger and so loud. Unfortunately, he tends to go unnoticed, especially when he has something to say. But just because others refuse to acknowledge him doesn't mean he should be ignored.

After reading this one, I immediately handed it to my youngest daughter. She's small, has a quiet voice and is so much meeker than her older siblings. Just like Marco, she's often shoved aside and ignored when she has something to say—something which frustrates her to no end. So for our family, this was a very easy story to relate to.

John Marco is cute and sweet and a nice kid, but he gets lost under the rest of the family's louder members. His frustrations is easy to relate to, but yet, he doesn't let it bring him down. It's fun to follow him as he discovers things the rest of his family overlook. Unfortunately, they're too busy to listen to him even about these. It will grab young readers' attention, and they will empathize with him. Even though he never lets it get him down. And this is what makes John a character to root for. His attitude remains, for the most part, positive. The end of the tale holds humor and winds things up very nicely.

The illustrations make it easy to follow along and add the extra zest along the way. The characters are well depicted, allowing their personalities and emotions to come across clearly. Plus, it's fun to watch John make his discoveries. These too allow the humorous ending to come across wonderfully and are sure to add a few giggles along the way.

It's a cute read with a topic many young kids can identify with.

The Author...
Annie Barrows has written many books for children, including the New York Times bestselling Ivy + Bean series, which has sold more than 5 million copies. She lives in Northern California.


The Illustrator...
Nancy Lemon lives in Charleston, South Carolina. This is her second book.