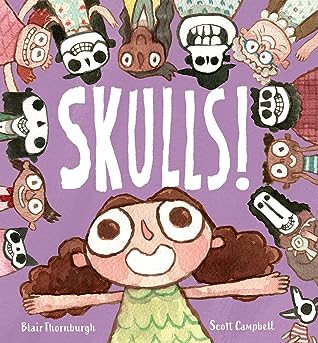 Debut picture book author Blair Thornburgh and award-winning illustrator Scott Campbell put their heads together to celebrate one of the most important bones in your body: the skull!
You probably don’t think much about skulls.
So what’s the big deal about them?
Well, every head
of every person
you’ve ever seen
has a skull inside.
And that includes YOU!
This smart, skull-positive story cheerfully dispels any fears kids might have about their skeletons, flipping our view of skulls from a spooky symbol to a fascinating, cool, and crucial part of our bodies.

Full of energy and silly moments, skulls grab an unusual spot in the limelight...along with cheese grilled sandwiches...and informational fun.

Skulls are found inside everyone's head, and these pages let their importance shine. Although sometimes skulls are seen as scary, and they hold lots of holes...important ones..., skulls carry a crucial role in our bodies. With the help of a very spunky girl and a bit of humor, young readers learn more about their skulls.

When I got this book in my hands, it screamed 'unique'. And it is, while being informative too. The topic is clear: skulls. With a ton of fun, not much text, and never ending excitement, the basic aspects of a skull are laid out in a very clear and slightly humorous way. It carries a tad bit of...hmmm..I want to say creepiness or macabre, but that isn't really it. Perhaps, it's the strange place skulls have in our society which gives this book the dash of uncomfortable but alluring spice. The author pulls the entire thing together wonderfully by adding just the right amount of humor. Add the very realistic facts, and it's an interesting mix, which is sure not to be forgotten the moment the book is laid down.

The illustrations fit the mood perfectly. Many of the people illustrated are depicted without faces and skin, but rather display their skulls in full glory. I think it's exactly this which gives the book an interesting atmosphere. But it's always cheerful, keeping chills away. The emotions in the illustrations add to the humor, while making the basic importance of a skull clear.

At the very end of the book is a list of lesser known facts about the skull, making this a well-rounded book in so many ways.

The Author...
Blair Thornburgh is the author of several books for kids and teens. A graduate of the Hamline MFA Program in writing for children and young adults, she lives outside of Philadelphia. Visit her online at BlairThornburgh.com


The Illustrator...
Scott Campbell's paintings have appeared in numerous shows and publications around the world. He has created award-winning comics, such as 'Igloo Head and Tree Head', which appeared in the Flight anthology and is the illustrator of Zombie in Love and Zombie in Love 2 + 1 by Kelly DiPucchio; East Dragon, West Dragon by Robyn Eversole; and If Dogs Run Free by Bob Dylan. He is the author and illustrator of Hug Machine. Scott lives in New York City. Visit him at PyramidCar.com