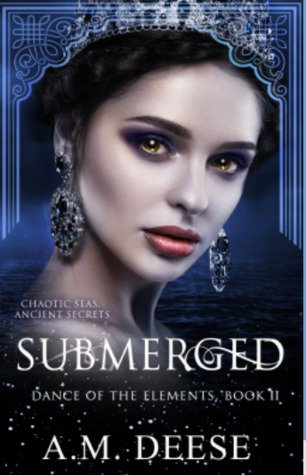 A WARRIOR PRINCESS.A DOPPLEGANGER.CHAOTIC SEAS AND ANCIENT SECRETS.“Jura pictured her friend’s beautiful face.”Jura and Tylak have successfully infiltrated the nation of Kitoi in search of answers but come upon a web of lies that will unravel the world as they know it. With the Tri-Alliance shattered and puppets controlling The Republic, they must find a way to save their nation before all perish.“Tylak reached for her hand, interlacing her fingers with his own.”Together, Jura and Tylak set out to free Amira from the clutches of a ruler gone mad. Jura hopes to meet with the Sea King in a desperate attempt to stop the impending war. Instead, she encounters his daughter, Coralyn, a powerful princess with plans of her own. With the drums of war beating faster, and more secrets rising all around her, Jura and her allies must stop the Queen of Shadows before the Sand Sea is submerged in chaos.

This book surprised me in so many ways. I didn't read the first book in the series, which was a mistake. It takes off after the events of book one, and without having known these, I was a bit lost for awhile. So, I definitely recommend hitting the first book before tackling this one.

The story is told from various character's points of view, allowing the reader to gain a broad view of what is going on. This is also necessary as the plot is well woven and each character has their own part to play. It's also this character depth which grabs and draws into the tale, making sure there are favorites as well as those to be disliked. There were times, which the story didn't draw in as much as I'd hoped...and I'm not sure why.

The scenes are vivid and do draw in. Especially Jura had me rooting for her with her strong character and determination. There are many unexpected twists and turns, and each one added more tension then the last. It's a well-layered fantasy with a lot to offer for the right fan.

Email ThisBlogThis!Share to TwitterShare to FacebookShare to Pinterest
Labels: AM Deese, Dance of the Elements, Submerged