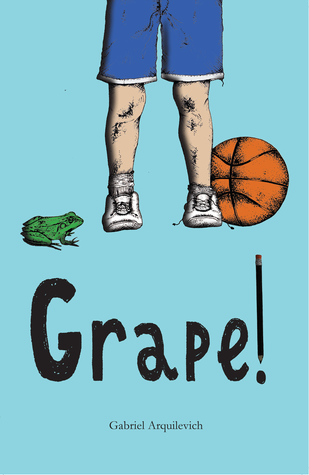 
Grape is in trouble again! He punched Miss Roof in the arm! Now he’s suspended for two weeks, and Principal Clarkson has threatened to send him to Riverwash, a school for problem kids. But he has one last chance. Grape must spend an hour a day writing about his history of trouble, and there’s a lot of trouble to choose from... Grape’s best friend Lou is by his side, and even though Grape drives his parents crazy, they’re pulling for him all the way. But will Grape make sense of it all? Will it be enough to keep him out of Riverwash?

Bitter-sweetness and a touch of humor make this a tale which touches the heart and proves there's more to trouble than just being mean.

Grape is in trouble again, but this time, he's suspended from school for two weeks. The principal hasn't decided whether to let Grape return or send him of to a school for problem children. Grape's one chance is to write down his memories of the times he's gotten in trouble over the years. And there are some big ones to chose from. But as he writes, he might discover more than the unfairness in all of it.

While starting and ending with the usual story scenes, the rest of these pages constitute Grape's journal. It takes place in the 1970's with a boy who tries his best to work with people, but they never seem to work with him back. In the end, the spiders talk in his head and things go wacky or simply wrong. Each episode is a mixture of humor and heart-aching consequences. Grape's mistakes are clear. Still, he never has ill intentions...not mean, anyway. He, like many kids, ends up finding himself in situations which blur the lines of rules, necessities or desire. Readers will understand Grape's problems and feel for him, while clearly seeing what exactly went wrong and why.

Grape isn't a normal kid. This is never directly said but becomes clear as the tale goes on. It's never said what exactly his problem is (outside of an accident which leaves a cracked skull when he's very young), only that he has spiders which wiggle and talk in his head when they shouldn't. It's a gentle way to help readers understand those who might be a bit different. It makes a great read for especially for the classroom environment and is sure to bring new awareness and insights into understanding those around us.

Gabriel Arquilevich was born and raised in the San Fernando Valley, a child of Argentine immigrants, a child of the ‘70s. His earliest memory of writing goes back to middle school. Later in college, he began writing poetry, and following the encouragement of a beloved teacher, pursued this with a passion. In time, he was off to UMASS Amherst, where a few years later with his MFA in hand, he took a job teaching sixth grade in Ojai, California. It was here where he says he fell in love three times: once with his wife, once with teaching, and then again with children’s literature. He's authored several middle-grade/early high school textbooks, including How to Write an Essay, A Guide to Using Shiloh in the Classroom, and World Religions (Teacher Created Materials). He also published Writing for 100 Days, which was named Cathy Duffy’s Top 101 Picks for homeschoolers. His poetry, published widely, has been nominated for a Pushcart Prize