Review: Momentous Events in the Life of a Cactus by Dusti Bowling 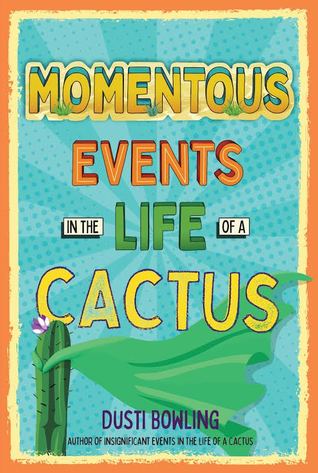 “High School. Two words that struck fear into the heart of every armless middle schooler I knew. Which was me. And like two people online.”

The sequel to the critically acclaimed Insignificant Events in the Life of a Cactus follows Aven Green as she confronts yet another challenge: high school.

Just as Aven starts to feel comfortable in Stagecoach Pass, with her friends and schoolmates accustomed to her lack of “armage,” everything changes once again. She’s about to begin high school . . . with 2,300 new kids to stare at her. And no matter how much Aven tries to play it cool, nothing prepares her for the reality. In a year filled with confusion, humiliation, fears, loss, and just maybe love, can Aven manage to stay true to herself?

Aven is entering high school, and after just getting settled into middle school, she's more than nervous at the idea of having to adjust again. Especially since her best friend, Connor, is now on the other side of town, and the high school is over four times as big as middle school was. But she is 'blasé'. And ready to take it on...even though everyone stares at her...even though a cute guy suddenly seems interested in her...even though it might be tougher than she expected.

There are several things I enjoyed about this book. Firstly, it's written with Aven going into high school, but still reads like a middle grade novel. While her age and the setting would normally throw this into the young adult category, it's exactly the kind of book older middle graders will appreciate. After all, they're nervous about high school and what awaits them...and this book hits exactly that. Secondly, Aven was born without arms, and while this obviously drives many aspects of the plot, the story itself doesn't really harbor on it. Of course, there are mentions of how she uses her toes to dial a phone and such, but it's not shoved in the reader's face. It makes this into a novel great for any kid who is uncomfortable about starting high school because they believe they'll stick-out or not fit in for some reason or another. And thirdly, the plot surrounds several aspects of Aven's life and gives her a very natural, rounded atmosphere. She has friends, she has family, and she has things outside of school which help balance her even when drama hits. She's a strong girl, who tackles insecurities and bullies in a realistic, healthy way.

The pacing is very well done. It's an easy read and holds attention until the very last page without weighing down with Aven's issues. It was a little interesting how many characters have issues, though. Plus, I was a little surprised by the supposed bullying event, which spiraled her into depression. While gentle, the event was exactly that—gentle. Considering everything she goes through and must go through (reality of how harsh kids can be), it was not believable that something like that could influence her so easily. Still, it will fit for more sensitive readers at the middle grade level, and her tale of finding herself again and fighting through still resonates with the reader. Add her lovely insights, friendship which never ends, and a dash of humor, and it's a read to recommend.

And here she is...
Dusti Bowling grew up in Scottsdale, AZ. She holds a Bachelor of Psychology and a Master of Education. She is the author of the critically acclaimed and award-winning middle grade novels Insignificant Events in the Life of a Cactus and 24 Hours in Nowhere (both Sterling). She lives in New River, AZ, and is available for interview. Follow her on Twitter at @Dusti_Bowling, and visit her online at DustiBowling.com.

Email ThisBlogThis!Share to TwitterShare to FacebookShare to Pinterest
Labels: Dusti Bowling, Momentous Events in the Life of a Cactus