Cover Reveal: The Wolf of the Baskervilles by Majanka Verstraete 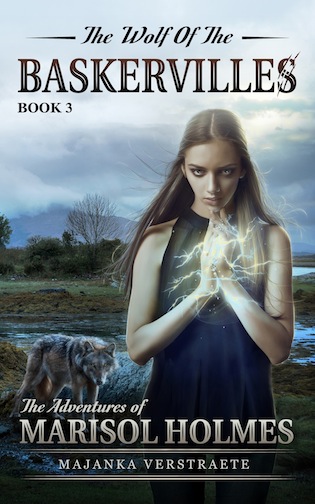 The Wolf of the Baskervilles
by Majanka Verstraete
The Adventures of Marisol Holmes, #3
YA Paranormal

Who is Marisol Holmes?
She’s a teenager.
Detective.
Jaguar shifter.
And don’t forget, she’s also the descendant of the great Sherlock Holmes.
Our heroine had been in some pretty tight spots before, but now? She’s about to face her biggest challenge yet: a powerful shifter with a taste for blood. No one has faced down the deadly wolf of the Baskervilles and lived to tell the tale.
Even so, Marisol Holmes plans to do just that.

Author Majanka Verstraete has written more than twenty unique works of fiction. A native of Belgium, Majanka’s novels explore the true nature of monsters: the good, the bad, and just about every species in between. Her young adult books include the acclaimed Mirrorland (YA Dark Fantasy) and Angel of Death (YA Paranormal) series of novels. At MHB, Majanka is currently developing a new YA shifter series with a fresh take on fierce female detectives called THE ADVENTURES OF MARISOL HOLMES.
When she’s not writing, Majanka is probably playing World of Warcraft or catching up with the dozens of TV series she’s addicted to.
Website / Goodreads / Facebook / Twitter

Email ThisBlogThis!Share to TwitterShare to FacebookShare to Pinterest
Labels: Majanka Verstraete, The Adventures of Marisol Holmes, The Wolf of the Baskervilles, YA Paranormal