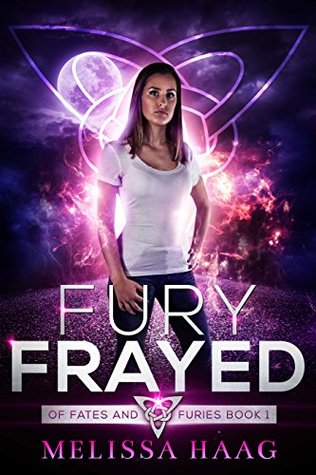 Fury Frayed
by Melissa Haag
Of Fates and Furies, #1
January 23rd 2018
YA Fantasy


Megan’s temper lands her in Girderon Academy, an exclusive school founded in a town of misfit supernatural creatures. It’s the one place she should be able to fit in, but she can’t. Instead, she itches to punch the smug sheriff in his face, pull the hair from a pack of territorial blondes, and kiss the smile off the shy boy’s face. Unfortunately, she can’t do any of that, either, because humans are dying and all clues point to her.
With Megan’s temper flaring, time to find the real killer and clear her name is running out. As much as she wants to return to her own life, she needs to embrace who and what she is. It’s the only way to find and punish the creature responsible. 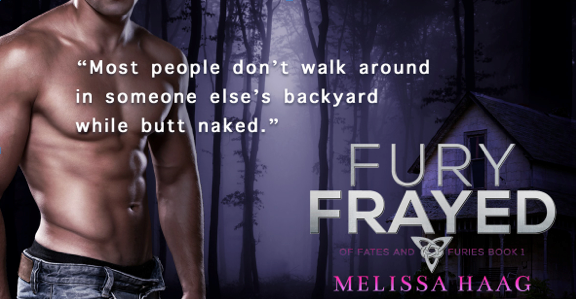 “WHAT WAS THAT FOR?” HE ASKED. ANGER HAD WIPED OUT ANY HINT OF MOCKING CURIOSITY FROM HIS TONE.
I COULD ALSO FEEL THE THROB IN MY FIST. HE HAD A HARD NOSE.
“TO SEE IF YOU WERE REAL.”
“MOST PEOPLE PINCH.” HE SOUNDED A BIT MORE NASALLY THAN HE HAD BEFORE.
MY IMAGINATION WAS SURE GOOD AT ADDING THE LITTLE DETAILS NEEDED TO MAKE THIS ALL FEEL REAL. I DIDN’T LET IT DISTRACT ME FROM THE MOMENT, THOUGH.
“MOST PEOPLE DON’T WALK AROUND IN SOMEONE ELSE’S BACKYARD WHILE BUTT NAKED.” NOT THAT I ACTUALLY MINDED THAT PART. HIS BICEPS WERE CLEARLY DEFINED, AND HIS THIGHS WERE THICKER THAN MY HEAD. REALIZING WHERE MY GAZE HAD WANDERED, I QUICKLY LOOKED UP AGAIN.
HE SHOOK HIS HEAD AND RELEASED MY WRIST.
“WHERE WERE YOU GOING?” HE ASKED.
“TO TOWN. DO YOU OWN PANTS?”
“IT WOULD BE BETTER IF YOU STAYED HERE.”
“FOR WHO?”
“YOU.”
“STAY IN A HOUSE WHERE A GUY SHOWS UP NAKED IN THE BACKYARD? YEAH, THAT’S NOT SOUNDING LIKE A GOOD OPTION.”
“IT’S THE SAFEST ONE.”
“OF COURSE, YOU WOULD THINK THAT. BUT SINCE THIS IS MY DREAM, I’M GOING TO SEE HOW MANY MORE NAKED MEN ARE FROLICKING AROUND THIS PLACE.”
HE STAYED QUIET FOR A MOMENT, STUDYING ME. I WAS JUST ABOUT TO TURN AND WALK TO THE FRONT OF THE HOUSE WHEN HE SPOKE AGAIN.
“THE PEOPLE IN THIS TOWN ARE GOING TO EAT YOU UP AND SPIT YOU OUT.”
WITHOUT WARNING, HE SCOOPED ME UP AND WALKED INTO THE HOUSE WITH ME. IN THE LIGHT OF THE KITCHEN, I STUDIED HIS FACE. HE LOOKED MAD, HIS JAW HARD AND A FROWN TUGGING HIS LIPS. VERY NICE LIPS. HIGH CHEEKBONES AND A STRONG NOSE. HIS GAZE FLICKED DOWN TO ME JUST BEFORE HE STARTED UP THE STAIRS. DEEP BLUE EYES. I HAD AMAZING TASTE IN DREAM MEN.
WHEN HE TURNED TO MY ROOM, MY HEART SKIPPED A BEAT. WAS I REALLY GOING TO DREAM THIS? A NAKED MAN CARRYING ME TO BED? I KNEW WHERE THIS WAS HEADED. 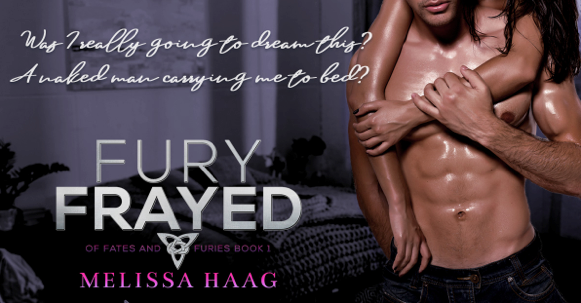 I love writing paranormal and fantasy romance stories. After finishing up the Judgement of the Six series, I thought I was ready to trade in my broody shifter males for something bit more mythological. Wouldn’t you know it…a few shifters snuck in! But, I managed a healthy selection of other creatures that made this series truly unique for me.
Writing characters with realistic motivations in a fantasy world is always fun. Fury Frayed was no exception. I laughed so many times while writing the first draft and again during the editing process. I hope you enjoy reading it just as much as I enjoyed writing it!

Email ThisBlogThis!Share to TwitterShare to FacebookShare to Pinterest
Labels: Fury Frayed, Giveaway, Melissa Haag, Of Fates and Furies, YA Fantasy