Interview with Author Jen Castleberry about A Wild And Unremarkable Thing with Giveaway! 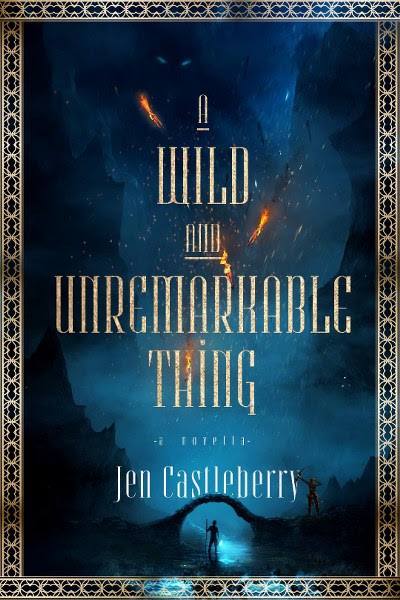 
Now, with hair shorn and breast bound, Cayda marches into the Summer Alps as Cody, a hopeful Champion seeking a dragon-slayer’s reward, with the full weight of her family’s survival on her shoulders.

But the road between poverty and prosperity is rife with beasts, betrayals, and baser temptations. Sensible Cayda soon discovers that she is not the only Champion with her eye on the prize, or the only one wearing a disguise.
With monsters, gods, and royalty hot on her heels, Cayda must ask herself if victory is worth sacrificing her identity for – or her life.

A Wild and Unremarkable Thing pits girl against dragon in a stunning blend of Greek mythology and medieval lore. Readers will not quickly forget the diverse cast or the thrilling, sexy ride!

Jen Castleberry resides in Virginia Beach with her husband and pets. Her background is in Communications and Animal Welfare. All of her pets are named after superheroes!


Congrats on the up-coming release! I love the cover, and the blurb has
totally drawn me in. So, now I'm horribly curious and would love a sneak peek
at all the goodness to come. Can you tell us about one. . .perhaps, your favorite
character. . .from A Wild and Unremarkable Thing?

By far, my favorite character to write was Fares. He’s this bright, sparkly guy with
a devil-may-care wit that really lights up a scene. Sometimes I wished he would just
pop off the page and exist, you know? As the comforts of a privileged life are stripped
away from him, we get to see what a good heart he really has, and that was especially
satisfying to write. So many of my closest friends are very Fares-like – snarky and
flirty and wildly inappropriate. The life of the party, but if you’re in trouble, they’ll
come through every time.  So I felt like I was writing my favorite kind of friend when
I was writing Fares.


How do you describe your writing style?

I’ve been told I have a very poetic voice. That’s a word I hear over and over again
in reviews – poetic, and I love that.


What, in your opinion, makes a good story?

That’s a loaded question! There are so many factors, and everyone has different
tastes when it comes to art. I think a good story has to have a mission – some honest
endeavor tucked beneath the layers, something profound that the author wants to
express. Some belief about humanity that sews all her pretty words together. In
AWAUT, I wanted to talk about people living in the grey, people who don’t feel
especially defined by any particular label, who are good and bad, masculine and
feminine, shaped and innate. That was one of the major themes that existed in the
undertow of the entire story.  Many people are empowered by labels and that can
be a wonderful thing, but there are lots of people, myself included, who have never
felt like we fit neatly and naturally into a specific category.  This is a truth I
understand intimately, something I knew I could express and explain honestly through
the medium of storytelling.  I think a good story requires honesty and a sense of
purpose on the part of the author.

Do you have a piece of advice for new authors?

Finish what you start.  Stick with your first drafts, see them through to completion.
The tendency to write a few chapters and get stuck, to lose faith in a story, to be
distracted by an exciting new idea – it’s a cycle unending for so many talented writers.
Completing full drafts is a skill that gets easier with time.  Even if you’re a third in and
100% sure what you’re writing is terrible, just finish it.  One, first drafts are always
terrible.  Two, you might surprise yourself and write something worthwhile.  And
three, if all else fails, writing a terrible draft is never a waste of time, because it’s
practice.  Get in the habit of finishing things.  You can always make a bad story better,
but you can’t edit a blank page.

What is something unique/quirky about you?

All my pets are named after X-Men! I’ve got an Akita named Gambit, a Maine Coon
named Psylocke, and a Basset Hound named Anna Marie Rogue.

What can we expect from you in the future?

I’ve got a few projects in the works, all of them Fantasy – that’s sort of where I like
to live. But I’m a big advocate for taking risks as an artist.
A Wild and Unremarkable Thing was unlike anything I’d written before.
I was playing with technical aspects that were outside of my wheelhouse –
tight, novella construction and a third-person, present POV. It was fresh and fun
and different for me as an author.  I firmly believe that – as an artist– you should
strive to entertain yourself first; if you’re not engaged, your readers aren’t likely
to be engaged either.  For me, that means playing around, trying new things,
running with scissors.  Regardless of what I put out next, you can expect a creative
shift.  Something readers haven’t seen from me before.