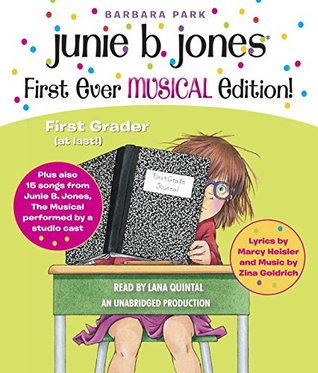 
This is a lively take on an already well-known character, and brings her story to life in a way which is sure to be enjoyed and played over and over again.

Junie B. Jones hits first grade and, in her journal, describes her impressions. Some things have chanAnd ged since Kindergarten. She runs into disappointments, but also enjoys several new experiences.

There are two CDs in this set. One has the story in audio format; the other is a collection of fifteen songs.B

The story is told in first person, from Junie's point of view, and holds all the energy that is to be expected from this vibrant, young character. The story is presented at an upbeat pace and reflects the thoughts of the age group well. The situations are ones the intended age group can relate to and the funny moments are sure to leave smiles on young faces. The narrator has a wonderful voice and brings across the emotions and Junie's quirks in a believable way.

The songs on the second CD are cheerful, dynamic and deal with topics fitting for children. The lyrics are sometimes a bit complex, but others invite to singing along. The tunes and rhythms are easy to listen to, and exactly the kind of music kids can listen to time and again.

Not only fans of the Junie B. Jones series will enjoy this CD set, but it's perfect for kids ages 4+ who haven't met this lovely character yet.

Blogging for Books was kind enough to send me this book for review. 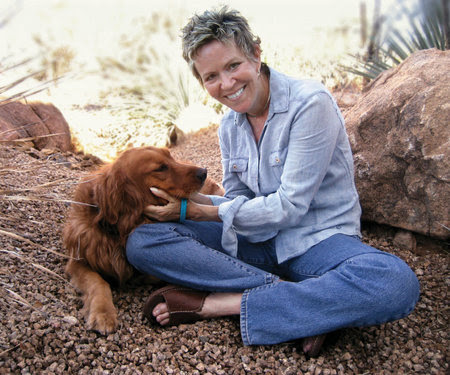 Barbara Park was best-known as the creator and author of the New York Times bestselling Junie B. Jones series, the stories of an outrageously funny kindergartener who has kept kids (and their grownups) laughing—and reading—for over two decades. Published by Random House Books for Young Readers, the series has sold 55 million copies in North America alone, has been translated into multiple languages and is a beloved and time-honored staple in elementary school classrooms around the world.

The series was consistently a #1 New York Times bestseller, spending over 180 weeks on the list, and Barbara and her books were profiled in such national outlets as Time, Newsweek, USA Today, The New York Times, and Today.

Park died on November 15, 2013 after fighting ovarian cancer heroically for seven and a half years.

Barbara Park arrived at the writing profession through an indirect route. Before becoming a bestselling and beloved children’s author, she originally intended to teach high school history and political science. She got her secondary education degree but quickly realized that her calling was to be a writer. She said, “My senior year of high school, I was voted ‘Wittiest.’ So several years later, I decided to try my hand at writing humor and see if I could be witty enough to make some money.”

She went on to write over fifty books, from the picture book Ma! There’s Nothing to Do Here!, a love letter to her grandson, to middle grade novels such as Skinnybones, The Kid in the Red Jacket, Mick Harte Was Here, and The Graduation of Jake Moon. Barbara won more than forty children’s book awards, including several Children’s Choice Awards.

On writing books for kids, Barbara once said: “There are those who believe that the value of a children’s book can be measured only in terms of the moral lessons it tries to impose or the perfect role models it offers. Personally, I happen to think that a book is of extraordinary value if it gives the reader nothing more than a smile or two. In fact, I happen to think that’s huge.”

Every bit as funny and as outrageous as her best-known character, Barbara shared a special connection with Junie B. Jones. She once said of the series, “I’ve never been sure whether Junie B.’s fans love her in spite of her imperfections . . . or because of them. But either way, she’s gone out into the world and made more friends than I ever dreamed possible.”

Barbara Park was born in Mount Holly, New Jersey, on April 21, 1947, and spent most of her adult life in Arizona. There she, with her husband, Richard, raised her two sons and spent time with her two young grandsons.

Throughout her life, Barbara was passionate about supporting many causes. She was a “wish” for several children participating in the Make-a-Wish Foundation and would dedicate her upcoming books to kids whose dying wish was to meet her. Barbara also founded her own charitable organization with her husband, Richard—Sisters in Survival (“SIS”), a nonprofit organization dedicated to offering financial assistance to ovarian cancer patients. SIS is an all-volunteer organization, and all donations go directly to women struggling with ovarian cancer. Barbara’s family will continue to run SIS.  (www.sistersinsurvival.org)
on January 15, 2017