I'm so excited to start off September with this book...and it's also the release day! While the idea of Double Dutch already had me hooked, the author's own reasons for writing this had me more than impressed. You'll have to take a look below and see how amazing she is! 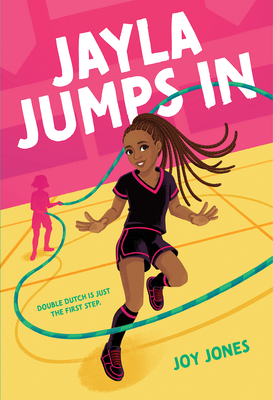 
When eleven-year-old Jayla finds out that her mother used to be a Double Dutch champion, she's stunned. Her mom, who's on doctor's orders to lower her blood pressure, could move like that?!? Jayla decides to follow in her mom's footsteps, thinking that maybe double Dutch can make her stand out in her big, quirky family. As she puts together a team at school and prepares to compete, Jayla finds that Double Dutch is about a lot more than jumping rope--and it just might change her life in ways she never imagined. Full of hilarious family dynamics and plenty of jump rope action, Jayla Jumps In follows one girl's quest to get her mom healthy and find her place in her community.

Lots of sass, tons of determination, and family heart mix to form a read, which leaves the legs itching to bounce themselves.

It all started with a Thanksgiving dinner and a Youtube video. Jayla had never heard of Double Dutch before, but when her cousin watches a pair of girls on her phone, Jayla wishes she could do it, too. When she discovers that her own mother was once a Double Dutch Queen and still knows more than a few tricks, Jayla's decision is made. But even after she convinces someone to help her form a team and join a competition, her struggles aren't over.

I can't remember the last middle grade novel I saw, which centered around jump roping, let alone Double Dutch. So, that already grabbed my attention. But these pages hold even more. While the sport does roll as a main theme, this one is also about family and learning to be more aware of those around you as well as recognizing their own hopes and needs.

I couldn't help but loving Jayla's family. The book starts with them, and they remain at the heart the entire way through. And I'm not talking just about the immediate family. The author brings in aunts and cousins and uncles, and it's a wonderful bunch, who's back and forth never grew boring. These people have heart and pack a punch. And yet, Jayla is at that age where she's trying to be her own person and discover who she is...which means that things don't always runs smoothly between her and the family. Especially Jalyla's mother has a special place in these pages as she struggles to manage her own health. I was impressed how this theme was addressed, naturally presented and woven in. It's clear that the mother suffers from being over-weight, but it's the health aspect which remains as the main focal point.

The dynamic of this book is simply fun and draws in. And the power of Double Dutch had me wanting to go out and try it myself...which wouldn't end well but made me smile. The only thing which struck me a little off in this story was Jayla's negative view on other people. Even when she really cares about someone, she still is quick and more than ready to point out their bad points and tends to be a bit nasty. While this offered possible character development at first, it sat the entire way through and made her into a bit of a sour apple.

But this is still a book I'd recommend and can see middle graders enjoying quite a bit. So, I'm giving it a thumbs up.

All About Double Dutch!!!

At the age of 63, I, Joy Jones, a black woman, was sent to Russia - to jump double Dutch. What? Well, I started a double Dutch team for adults and in 2018, DC Retro Jumpers was invited to be cultural ambassadors abroad. Now, double Dutch has taken me on a new journey. I'm also the author of
TAMBOURINE MOON, chosen as a Kid’s Pick of the List by the American Booksellers Association; PRIVATE LESSONS: A BOOK OF MEDITATIONS FOR TEACHERS and a how-to for teens, FEARLESS PUBLIC SPEAKING. And I work for DC Public Library.