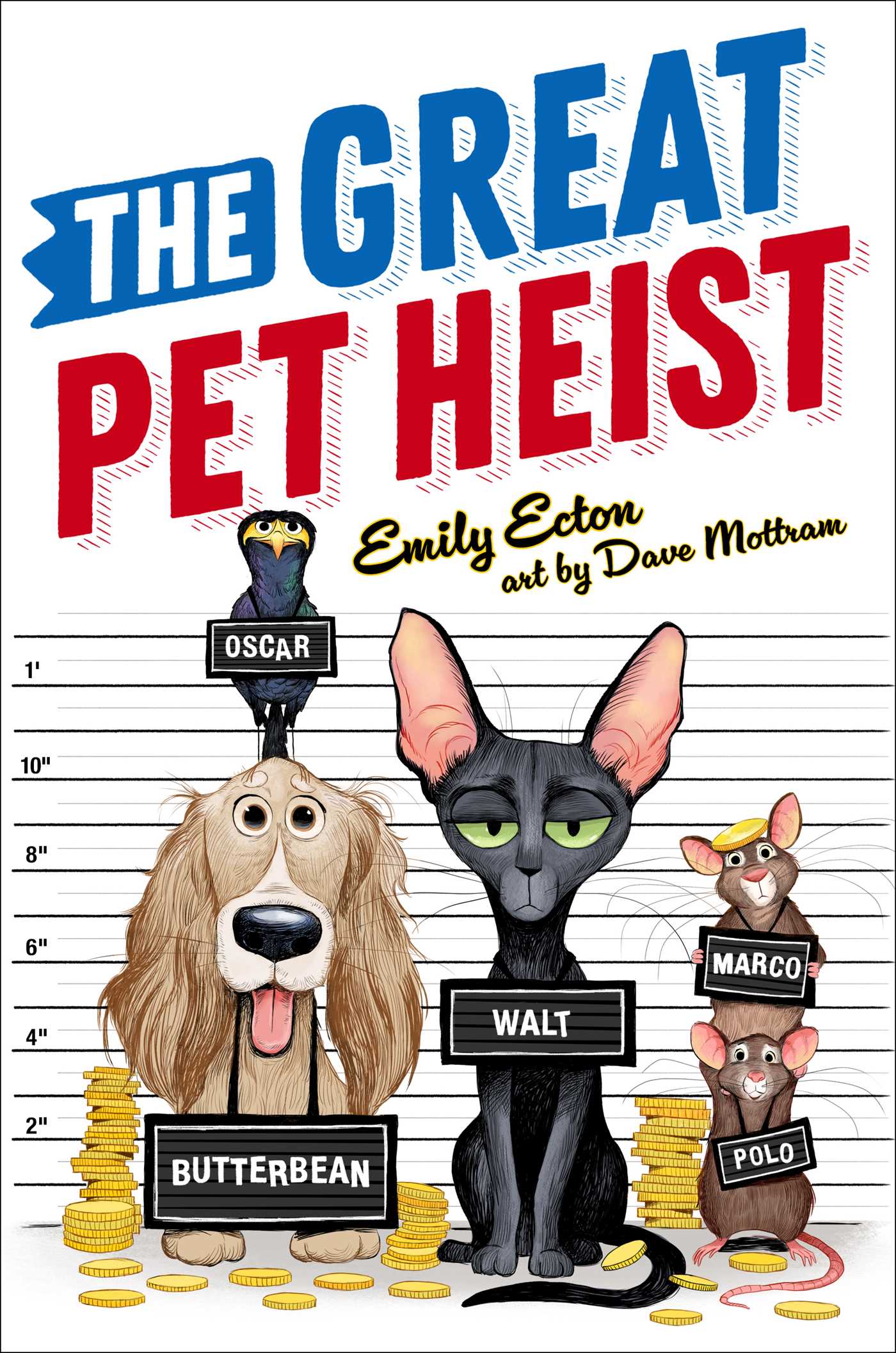 THE GREAT PET HEIST
by Emily Ecton
Art by Dave Mottram
Atheneum Books
Middle Grade Fiction
256 pages
ages 8 to 12
Ocean’s Eleven meets The Secret Life of Pets in this hilarious and delightfully illustrated novel following a ragtag group of pets who will do whatever it takes to avoid being sent to the pound.Butterbean knew she wasn’t always a good dog. Still, she’d never considered herself a BAD dog—until the morning that her owner, Mrs. Food, fell in the hallway. Admittedly the tile was slipperier than usual, mostly because Butterbean had just thrown up on it.Now Butterbean and her fellow pets have to come up with a grand plan to support themselves in case Mrs. Food is unable to keep taking care of them. When they discover a mysterious man in their building who seems to have lots of loot, they plan a heist. Oscar the mynah bird is the brains of the operation. Walt the cat has the necessary slyness and slink. Marco and Polo are the reconnaissance rats. And Butterbean...well, no one would ever suspect a cute little wiener dog, right? Can these animal friends can pull off the heist of the century?

MY TIDBITS
First, I'm not a big fan of animal fiction for middle graders. There are a few reads, which I enjoy but usually, it's just not a genre which gets me excited. This book was one of those rarities.
Butterbean didn't mean to land Mrs. Food in the hospital, but she did. Now, her and the other animals in Mrs. Food's household are in trouble. While they are being temporarily cared for by a girl, they also caught wind that the situation might quickly take a turn for the worse...if Mrs. Food doesn't return. Luckily, this pack of friends (a dog, a cat, a bird and two rats) are craftier than humans might think. Soon, they come up with a plan to make sure they can afford to purchase their own food and take care of themselves in the future. And what a plan it is!
The first pages already had me hooked. A super cute, sweet dog accidentally has knocked out her owner, and maybe even murdered her. I can't say I've ever had a book start quite like that, and it did grab my attention. Especially since it isn't a serious read. These animals pack personality and then some. Their interactions and thought processes are simply funny, and yet, they have a very serious heist to pull off. One they mastermind...and it's a delight every step of the way.
This is advertised as a mixture between Ocean's Eleven and  The Secret Life of Pets. While I usually read such comparisons with a bit of a smirk (often, the books don't really hold up to these), but this one does. And in a quirky way. There's also a ton of heart involved. I especially enjoyed their concern for Madison (the girl), and how the pets accepted each other. Even in more questionable moments, they had each others' backs.
This isn't a 'based on reality completely' sort of read. Obviously, not. There are some parts which go beyond logic and a few others things which take imagination. But that's also part of the magic of imagination and doesn't hurt the story in any way. Also, the artwork deserves extra kudo points. It was always a treat to stumble across the next illustration.
I'd recommend this one to readers eight to eleven, since slightly older readers are probably going to want a little more in some ways. But even I as an adult enjoyed reading this and found myself smiling more than a couple of times.
on September 20, 2020