Review: The Curse of the Spider-riders by M. Dane 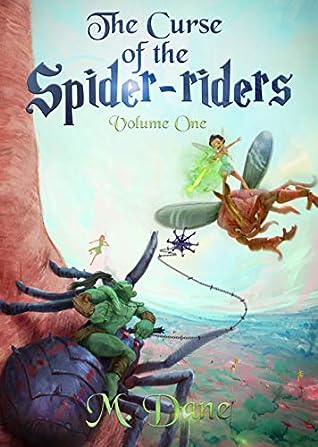 THE CURSE OF THE SPIDER-RIDERS
Volume One
by M. Dane
MG Publishing
Middle Grade Fantasy
118 pages
ages 7 to 12


Spider-riding monsters, pesky faeries and a boy far from home; this story is a magical adventure from the very first page!In a hive nestled amongst the treetops of a wooded mountain, a colony of faeries lead a life of peace. Unbeknown to them, an army of bloodthirsty monsters gather in the tunnels below. Monsters molded by darkness and forged into savage warriors. Consumed by hatred, they prepare to launch an attack on the hive. Battle-hardened creatures all, they have little fear for their future…But they should. For in the gloom, Jakoby, an eleven-year-old boy, stumbles across their plan. He will do anything to stop the slaughter, even if it means laying down his own life.But the burrows whisper truths long since buried. Truths which expose a different side to the faeries.A darker side.

I'd seen this one earlier this year popping up all over the middle grade world with whispers of excitement and simply a good story. So when the author asked me if I wanted to take a look at it, there was no way I'd say 'no'.  And it was as much fun as I'd hoped it be.
This is the tale, which allows imagination and fantasy to flow. In other words, just right for middle graders (and those, like me, who never really grew-up anyway). The main character, eleven-year-old Jakoby, is homeless and stays with his 'gang' of kids, who are doing their best to survive. It's a dangerous life from the very first page, and this alone draws in and promises tons of tension and action.
The author doesn't waste time with passages concerning scenery details and deep, emotional explorations, but rather, lets the story fly while unfolding a rich world at the same time. The characters quickly become like good friends...the kind a reader wants to go on an adventure with. And that's great because this story tumbles head first into non-stop action, more than a couple surprises, and a journey, which can only be founded in fairy dust, spider webs and dreams. It's a contagious mixture, which is sure to excite young fantasy fans...and those, who simply love a fun tale.
The writing is always poetic and might have been polished a bit more, but that by no means ruins this adventure. And I doubt readers will even notice. I especially see this one as a terrific read-aloud for parents to share moments with their kids. It's one of those books, which will definitely have listeners asking if it's finally time to hit the next chapter. Even for those who want to hit it on their own, it's a fun read. There is definitely violence, moments of courage, friendship, dark evil, tension, a character who tests their limits...and so much more. And that is all packed in around 110 pages, which makes it great for reluctant readers as well.
on September 24, 2020

Email ThisBlogThis!Share to TwitterShare to FacebookShare to Pinterest
Labels: M. Dane, The Curse of the Spider-riders