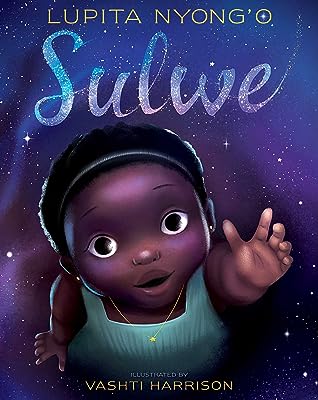 
From Academy Award–winning actress Lupita Nyong’o comes a powerful, moving picture book about colorism, self-esteem, and learning that true beauty comes from within.
Sulwe has skin the color of midnight. She is darker than everyone in her family. She is darker than anyone in her school. Sulwe just wants to be beautiful and bright, like her mother and sister. Then a magical journey in the night sky opens her eyes and changes everything.
In this stunning debut picture book, actress Lupita Nyong’o creates a whimsical and heartwarming story to inspire children to see their own unique beauty.

This is a beautiful book and tale, which takes a problem many children can relate to and then sweeps it off into the world of imagination and dreams in a lovely fairy tale.

While Sulwe believes every single one of her family members is beautiful, she's convinced that her own darker skin makes her uglier than them. The teasing and taunting at school doesn't help matters. Sulwe tries everything she can to make her skin lighter, but nothing works. Mother, of course, tries to explain how gorgeous she really is, but Sulwe isn't convinced. And then, a shooting star enters her bedroom, and she's swept away on an amazing story, which might help show what true beauty is.

Already the cover grabbed my attention with the lovely big eyed girl and the magical stars. And that's what this read is—magical. The story starts with a very modern day setting and family, allowing the listener/reader to get to know Sulwe and sympathize with her plight. While not every listener will have the same problem as Sulwe, the idea of not fitting in or not liking a part of oneself is something many listeners can relate to. And Sulwe's desire to change just touches the heart. It's so bitter sweet and sad, making the reader wish they could reach out and hug her.

After this introduction, the story takes a sudden shift into the world of fantasy and lore. It jerks a bit, but the tale of the two sisters is so wonderfully done, that the reader/listener is quickly swept away. It's beautiful and presents the message loud and clear. True beauty isn't always immediately recognized, but that doesn't lessen it. The most lovely beauty comes from within and is as bright as a star.

The illustrations are simply a treat. Not only are Sulwe and her family well depicted, but the flight into the folk tale is as wondrous as the story itself. It's the type of book listeners will want to hear again and again, and not easily forget the tale after the last page has been read. In other words, it's a lovely read young listeners (and older ones) are sure to enjoy.

The Author...
Lupita Nyong'o is a Kenyan actress and producer. Her first feature film role was in the film 12 Years a Slave, for which she received the Academy Award for Best Supporting Actress as well as multiple accolades, including the Screen Actors Guild Award, the Critics' Choice Award, the Independent Spirit Award, and the NAACP Award. She has since starred in Mira Nair's Queen of Katwe, Star Wars: The Force Awakens, Ryan Coogler's record-breaking box office hit Black Panther, and most recently in Jordan's Peele's critically acclaimed horror film Us. Nyong'o earned a Tony Nomination for her Broadway debut in Danai Gurira's Play Eclipsed. She lives in Brooklyn.


The Illustrator...
Vashti Harrison,  author and illustrator of the bestselling Little Leaders: Bold Women in Black History, is an artist, author, and filmmaker with a passion for storytelling. She earned her MFA in film and video from California Institute of the Arts, where she snuck into animation and illustration classes to learn from Disney and DreamWorks legends. There she rekindled a love for drawing and painting. Now she uses her love for both film and illustration to craft beautiful stories for children.
on October 20, 2019