Review: The Legend of Zagaboo by James Pettinelli 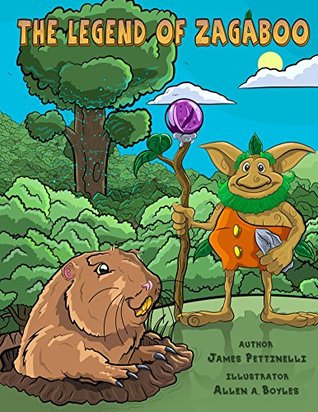 THE LEGEND OF ZAGABOO
Zagaboo, Book #1
by James Pettinelli
Illustrated by Allen A. Boyles
Children's Fantasy
28 pages
ages 4 to 10


Zagaboo is a troll king who rules a magical kingdom deep underground beneath the biggest tree in the forest. Many trolls live there with Zagaboo, each with very different talents. With the help of gophers, their closest friends and assistants, they've dug thousands of chambers and built swimming pools, ponds, soccer fields, dance studios, and jungle gyms made of huge letters. There, they teach children how to overcome the challenges of learning how to swim, fish, play sports, dance, read, or whatever they want to do! All little boys and girls need to say is, "Zagaboo, Zagaboo, where are you?" and pinch their ear before going to sleep. Zagaboo's purple marble will glow, signaling they need help and want to go to Zagaboo's Kingdom. Once there, the adventures and learning begin!

Magic comes to life in this fun tale of a boy, his love for carving, and a troll to love.

Jack lives on a farm and is expected to help his parents with chores such as milking the cows, but Jack has a problem. He's terrified of animals! While hiding in the hay barn, he does one of his favorite activities and widdles a cute troll. With the wood troll at his side, he finally feel brave enough to do things he couldn't before. But everything changes, and Jack accidentally loses his troll, Zagaboo. Add a little fairy dust, magic and an entire new adventure begins as Zagaboo comes to life.

This is a magical tale about a wonderful troll, Zagaboo, and how he and his troll friends came to be. It's the type of story which makes imagination take flight and allows kids to dream that there's much more to the world than that which they see. Jack is an average boy, who's easy to relate to. After all, kids are afraid of things. It's sweet to watch as he finds his own bravery through his love for wood work. This might have been a sweet story all in itself, but the author continues and allows the tale to explode into the world of fairies, magic and a lovely warmth. Zagaboo isn't only about trolls, it's about friendship and being there for each other.

The illustrations are bright, bold and accompany the story nicely. Especially during read-a-loud sittings, the illustrations allow the listeners to get caught up in the fun world. And this does work well as a read-a-loud. Slight older children, ages 8 to 10, can grab it up on their own and experience a fun, wholesome adventure, while not feeling bogged down thanks to the shorter page length and colorful illustrations. It's not a picture book for young readers, but is more of a story book...and a nice one too.
It sets the tone for a lovely series, one I'm looking forward to reading.


Other books in the series!!! Maddie never learned how to swim and becomes anxious about going to her best friend's pool party tomorrow. She doesn't have much time to prepare, so Maddie tugs her ear and recites, 'Zagaboo, Zagaboo, where are you.' The chant summons Zagaboo, a troll king who lives underground deep in the forest. Zagaboo immediately assigns Winko and Jingjang (his two swimming trolls) to teach Maddie how to swim. During her visit in Zagaboo's Kingdom, Maddie swims with rainbow fish, kisses a huge frog, and dances the Zagabooty Shuffle. Maddie Swims Troll-Style is the second installment of the Zagaboo Stories. This book takes readers on their first true adventure into Zagaboo's Kingdom. Before he goes to sleep, Charlie tugs his ear and says the magic words, “Zagaboo, Zagaboo, where are you?” The next thing he knows, Charlie is racing toward Zagaboo's Kingdom with Dr. Razz atop a speeding gopher. Dr. Razz is a paleontology troll and is going to help Charlie learn where to find dinosaur bones and how to dig them up. Charlie is going fossil hunting with Uncle Doug in the morning, so Charlie doesn't have much time to learn about paleontology. During his visit to Zagaboo's Kingdom, Charlie gets tickled by a pack of star-nosed moles, digs up an ancient magical creature, and meets the Shelltop Fairy Queen.

Find out more about James Pettinelli and Zagaboo at their website...Zagaboo.com!