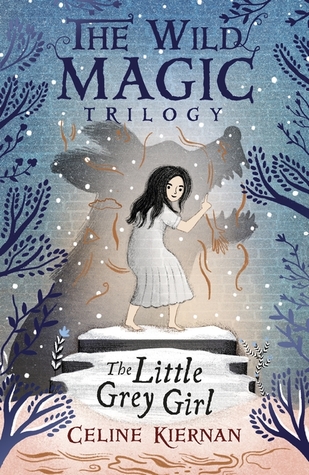 In the second book of the Wild Magic trilogy, courageous young Mup and her family are trying to heal and restore the kingdom when they uncover an ancient and powerful anger.
The old queen and her raggedy witches have fled Witches Borough, and Mup’s family has moved into the cold, newly empty castle. But the queen’s legacy lingers in the fear and mistrust of her former subjects and in the memories that live in the castle’s very walls. While Mup’s mam tries to restore balance to a formerly oppressed world, Mup herself tries to settle into her strange new home with her dad, Tipper, and Crow. When an enchanted snow blankets the castle, Mup’s family is cut off from the rest of the kingdom, and the painful memories of the old queen’s victims begin to take form, thanks to a ghost whose power may be too much for even Mup and Mam to handle. Celine Kiernan weaves a timely and essential truth into the second book of her trilogy: that dismantling oppression means honoring the pains of the past, and perhaps the most potent magic of all is encouraging joy and hope wherever possible.

Firstly, I didn't read book one and that was a mistake. Book two continues after where the first one left off, leaving a bit of a lost feeling and light confusion during the first chapters. So, read this one as a series.

After defeating the queen and witches of book one, Mup's family lives in her castle—a home Mups has trouble settling in to thanks to the experiences. An strange blanket of snow, however, changes the situation from uncomfortable to threatening thanks to a ghost. Mups with Mam must find a way to defeat this new, powerful threat.

The author has created a beautiful, enchanting world which holds many corners of shadows and darkness. Mup's uncertainty and uncomfortable situation comes across in poetic vividness and makes her very easy to relate to. While I really should have hit the first book before reading this one, I did find myself drawn into the tale and it's alluring atmosphere. The magic takes over and mixed with the danger, creates a chilling realm. Just right for fantasy fans who love to hide under their blankets with flashlights.

While Mup's isn't in for an easy battle and the dangers have the reader swallowing more than once, it's a story of hope and friendship as well. Mup's determination and wonderful moral compass make her a true heroine to root for. This is a series definitely worth a read.