Review: The Piraroo by Marko Kitti 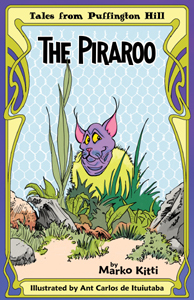 I’m afraid you’re soon going to meet a tarantula the size of a kitten. You’re also going to bump into a whopper of a seagull who is the British Champion in Poop Bombing. Not to mention an extraordinary, furry creature whose ancestor once belonged to a notorious pirate captain.

You’re also going to meet a ten-year-old boy called Max, the owner of the tarantula, whose life is about to turn upside down in this nail-biting adventure that includes petnappers and disgusting healthy smoothies!

So I am warning you, Dear Reader: Should you decide to read about Max and his animal friends, your life will never be the same again.

After reading and loving the Jesper Jinx series from this author, I was curious and excited to see where he was heading next. I was not disappointed.

Max leads a pretty normal life. His mother is a little over zealous in her determination to win a health smoothie contest with the most disgusting flavors, his younger sister is a pain in the neck, and his father is busy keeping both of them happy while working, but, at least, he has his pet spider. Until his spider dies and becomes bird food. But that's exactly what needs to happen to set off an exciting, informative and fun adventure.

Humor and action are written big in this book. Max is a wonderful ten-year-old, who does the best he can given his situation. He's clever, yet misunderstood at times. His love and curiosity for animals not only makes Max easy to cheer for but gives him just the right touch of sweetness which is hard to ignore. It's simply fun...and something kids can easily relate to...as he deals not only with his wacky family but with the crazy problem which stumble his way.

The author meets the readers on a more personal level by addressing them directly. This adds an immediate connection which draws in and makes the reader feel involved. Although hitting on fantasy, the animals in the book also poke reality and offer the reader some interesting insights on lesser known animals in some spots...not everything is sheer imagination. I found this connection to be a nice touch.

One of the best aspects of this book can be found in the illustrations. They are bright and bold, and there are many of them. Although the length of the book might appear daunting, at least a third of the tale seems to be illustrations. These not only add life to the book but make it perfect for even reluctant readers. So, this receives kudo points from me!

All in all, it's simply a fun read and highly recommendable for especially boys and reluctant readers, or those who love an adventurous, humorous read.

Marko Kitti is a Finnish writer and illustrator. He is best known for his humorous Jesper Jinx children’s book series. Born and raised in Finland, Marko now lives in the small town of Santa Venera in Malta.
Marko’s scribblings are listed here: http://markokitti.wordpress.com/books/
https://jesperjinx.com